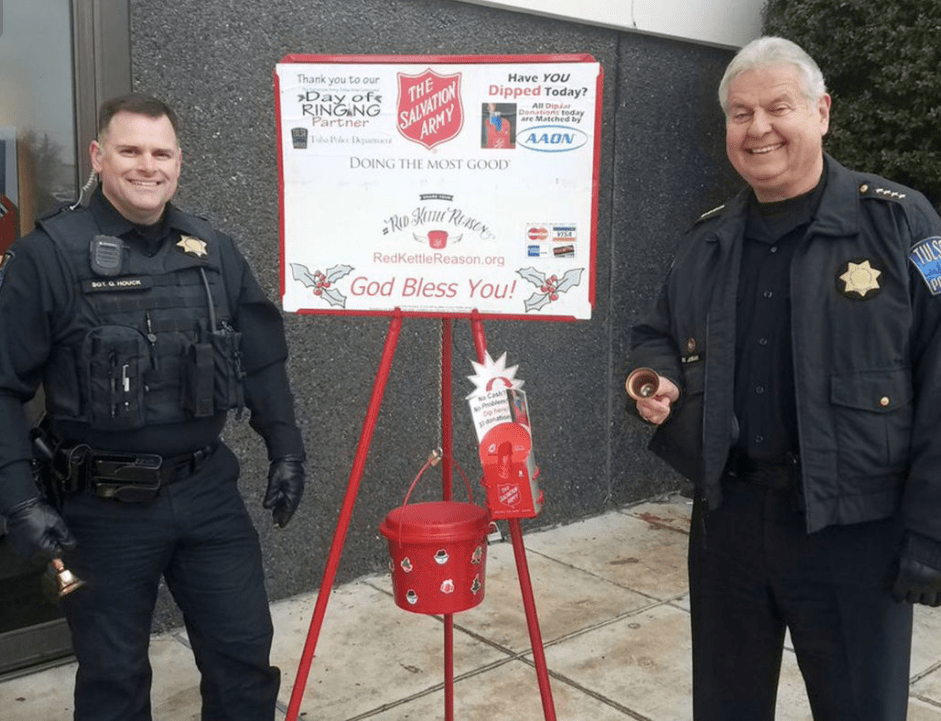 Tulsa (OK) police officers will no longer be able to participate in the Salvation Army’s holiday donation drive while in uniform.

Police notified the charity after the  Freedom From Religion Foundation threatened to sue the Police Chief and the City of Tulsa for ringing the bells for the the Salvation Army.

Tulsa Police Chief Chuck Jordan declined to comment but the Tulsa Fire Department, who also participates in the annual event, was not notified by the Religion Foundation.

According to the Tulsa World, Tulsa police and firefighters have been ringing bells for the Salvation Army fundraising drive for decades. The departments even compete to see which one can raise the most money.

In question is the Salvation Army’s Christian connection. It has been a part of the overall Christian Church for 150 years but much of their activity does not include religion including sports leagues and thrift stores.

The letter states that the organization’s purpose is to protect “the constitutional principle of separation between state and church, and to educate the public on matters relating to nontheism.”

According to the letter, on Dec. 22, 2017, the Police Department posted a picture on its Twitter account in which Jordan and another officer are shown ringing bells for the Salvation Army, with the message: “Come see the Chief and Sgt. Houck at the Macy’s south door,” and a pitch to donate.

“We write to inform the department that as a government entity it cannot endorse a religious charity,” the letter continues. “The department’s Twitter posts and bell ringing violate the Establishment Clause of the First Amendment by favoring a specific religion over another.”

The organization also describes itself as the largest free-thinking group in the nation with more than 30,000 members.