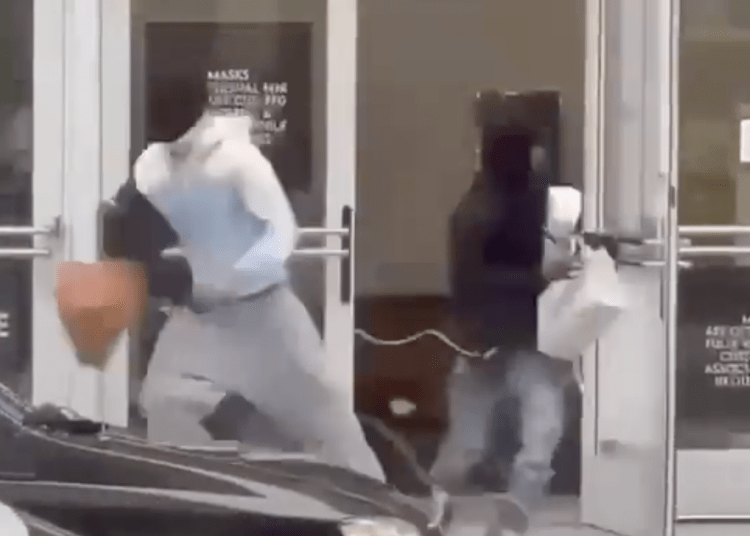 SAN FRANCISCO — The lawlessness present in San Francisco was on full display as thieves bolted from a Neiman Marcus store with arms full of goods taken Monday evening. The scene looked similar to looting we’ve become accustomed to seeing during riots over the past year, but there was no ongoing civil unrest while the crimes took place at the high end store.

The brazen thefts took place about 5:49 p.m. shortly before the store was about to close for the evening. Thieves smashed display cases and grabbed items from the racks before running out of the store, KTVU-TV reported.

Cellphone footage of the incident showed at least 10 suspects sprinting from the store with arms full of “free stuff.”

Some made a quick getaway in vehicles that appeared to be waiting for them in the street just outside department store doors.

No arrests have been made as of Tuesday morning. But then again, it’s San Francisco where DA Chesa Boudin goes out of his way to avoid prosecuting crimes, which likely led to the blatant thefts.

As rising crime in San Francisco continues to take a toll on area businesses, Target recently announced they will no longer stay open past 6 p.m. due to concerns about the safety of their customers, Law Officer reported.

“For more than a month, we’ve been experiencing a significant and alarming rise in theft and security incidents at our San Francisco stores, similar to reports from other retailers in the area. Target is engaging local law enforcement, elected officials and community partners to address our concerns,” the retail giant said in a statement. “With the safety of our guests, team members and communities as our top priority, we’ve temporarily reduced our operating hours in six San Francisco stores.”

Furthermore, Walgreens plans to shut down ten stores in the area due to a surge in shoplifting. San Francisco Supervisor Ahsha Safai told Blaze News that seventeen Walgreens over the last five years are already gone.

Which retailer is next?