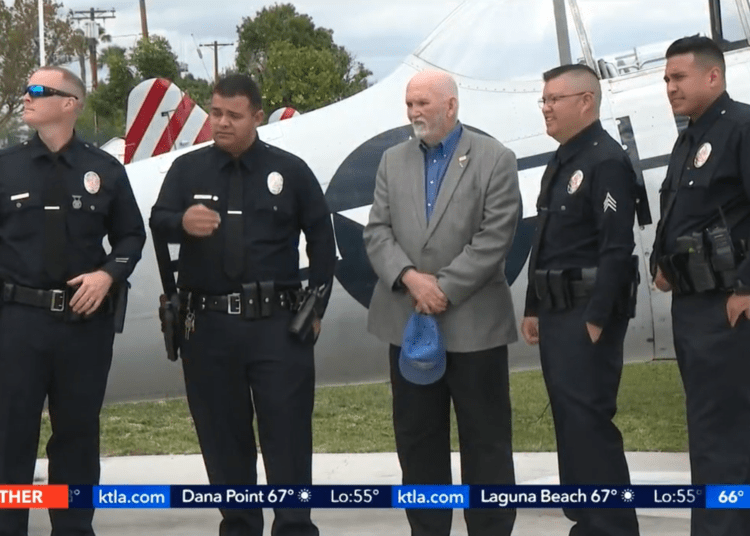 LAPD officers are honored after rescuing a downed pilot from an oncoming train. (KTLA)

LOS ANGELES – Pilot Mark Jenkins miraculously survived when his plane crashed onto railroad tracks in Southern California in January, and was then saved by LAPD officers from an oncoming Metrolink train that slammed into the downed aircraft.

The small single-engine airplane was a Cessna 172. It came down on the Metrolink Antelope Valley line train tracks Jan. 9. Officers rescued Jenkins with mere seconds to spare, Law Officer reported at the time.

So after nearly losing his life twice in a matter of minutes, the pilot is forever grateful.

On Saturday, Jenkins and the Condor Squadron, with which he is associated, honored his rescuers for their courage and bravery, according to KTLA.

“I’m so glad I have four friends with the LAPD who rescued me and saved my life,” Jenkins said.

The officers recalled the perilous circumstances on a day they saved the man’s life.

“At first, I couldn’t really believe it, seeing the arms of the train track coming down … I just thought it’s going to get worse. It couldn’t get any worse, and then it just did,” said LAPD Officer Robert Sherock.

“It’s like the stars were aligned that day. I wasn’t even supposed to be there. I was on vacation that day and came in to work some overtime. I was coming back from another call, and I don’t usually take that way back to the station, but I was able to see the plane go down,” Sgt. Joseph Cavestany recalled.

“Just thinking back on that moment, hearing the train and feeling the vibrations through the floor and just hearing the crumpling metal, I was like, ‘Wow, that was really close.’ I’m thankful we’re alive and Mark’s alive,” Officer Christopher Aboyte noted.

LAPD Chief Michel Moore was also present to offer praise for his officers.

“I’m proud of the fact that a typical day went to high-crisis mode and they responded not just professional but with valor and the desire to save a life,” Moore said.

Although the officers insist they were simply doing their duty, the Condor Squadron took them for a ride as a gesture of thanks, KTLA reported.

“We were just doing our jobs. God put us in the right place at the right time and we were able to do our job,” said Officer Damien Castro.

It was unclear what brought the aircraft down after taking off from Pacoima’s Whiteman Airport in the San Fernando Valley. Jenkins was the sole occupant aboard.

“The Condor Squadron is a group of aviation enthusiasts dedicated to preserving the memory of those who have served our country over the years.  One of our main activities is memorial flights in restored North American Aviation AT-6/SNJ trainers originally flown during World War II.

“After the war ended the venerable old planes were often assigned to National Guard and other units for training purposes.  In 1962 several members of the 146th Fighter Group formed the Condor Squadron as a search and rescue unit of the Civil Air Patrol.