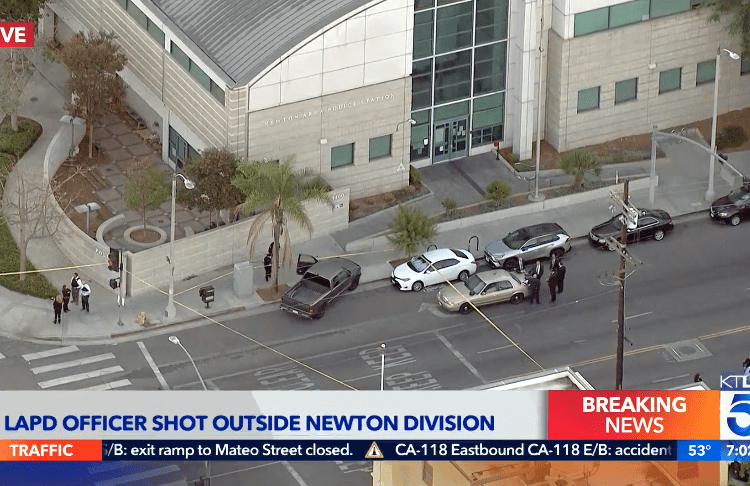 An investigation is underway related to the shooting, which occurred shortly after 5 a.m. near the intersection of East 34th Street and South Central Avenue, LAPD Officer Lizeth Lomeli said.

The wounded officer was described as conscious and breathing while being transported to a nearby hospital following the shooting, according to Lomeli.

Responding officers established a large perimeter around the area during their search for the gunman. One person was taken into custody, Lomeli said, without providing further details.

According to a police source who was not authorized to release information, a 14-year-old was detained nearby at the intersection of East 29th Street and Naomi Avenue in connection with the shooting, the Los Angeles Times reported.

Video from the scene showed a damaged pickup truck on a sidewalk near Newton Division as officers conducted their investigation.

Investigators found a gun at the scene that they believe was used in the crime.

Although circumstances surrounding the shooting were not clear, LAPD Capt. Stacy Spell said the officer was shot while driving to work.

The unidentified male officer was able to get to a nearby fire station to seek help and then was rushed to a hospital, according to the Times.

LAPD Chief Michel Moore said in a tweet that he talked to the wounded officer by phone and was grateful that it appeared he would survive the “unprovoked attack.”