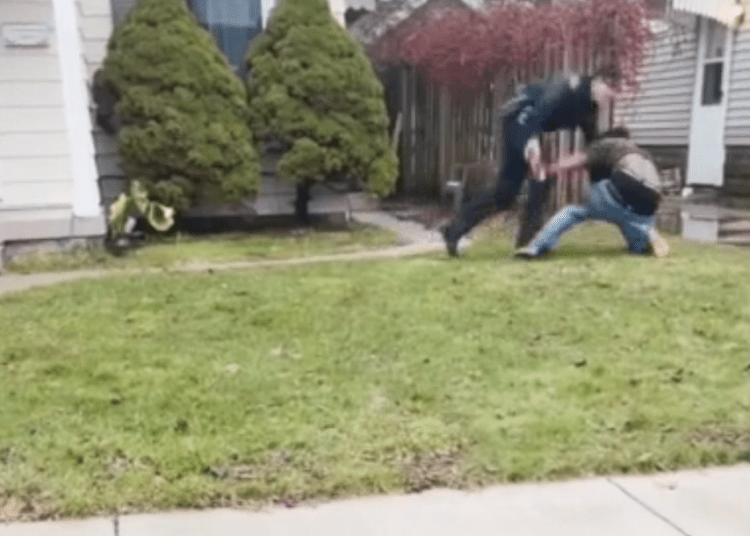 I just wrote an NPA article about a police officer from Norfolk, Virginia, Edmund “Ryan” Hoyt, who was wrongly tried (twice) for voluntary manslaughter (first was a mistrial) and then finally, rightly, acquitted—because there was never any evidence the officer committed a crime.

One more time: just because you don’t like the outcome, doesn’t mean the officer did anything wrong.

In that case, a suspect, allegedly, first threatened the officer’s wife and little girls with a knife while they were walking on a sidewalk. When confronted by the officer, the suspect also threatened him with a knife, so the officer shot him. Done deal, right? Not so much, these days.

Of course, it’s happening again. Why is it that law enforcement agencies in too many places are having a hard time hiring and retaining cops? It’s a complete mystery, right?

Back in April, I wrote about a Grand Rapids, Michigan police officer, Christopher Schurr, who, if you ask cop-haters, shot a suspect in the back of the head, killing him—for no reason. But there was a reason—a good reason. If he hadn’t, the suspect may likely have killed him.

Nothing is as simple as the anti-cop factions would have you believe. Regardless, because the racial calculus was correct (white cop-black suspect), protesters hit the streets as if the cop had shot some saint who’d just been out healing the masses.

Here’s the nutshell version of the incident from both USA Today and Judge Ayoub with some brief analyses. USA Today wasted no ink in their summarizing the incident:

“Patrick Lyoya escaped violence in Congo: Then police killed him.”

Well, a few things happened along the way.

According to The Hill, Judge Ayoub ruled, “‘Applying the probable cause standard, there is at least some evidence from which a person of average intelligence could conclude that defendant’s shooting of Lyoya in the back of the head was not reasonably necessary to prevent his escape,’ Ayoub wrote in the Monday memo, noting that Lyoya was not in a position of active escape or flight when the shot was fired.”

Now, that bar is so low, it’s lying on the ground.

Was it to prevent his escape or was to prevent the suspect from using the Taser on the officer?

A police captain testified he could not determine if the suspect was fighting with the officer or trying to escape. Well, unless the captain could read the suspect’s mind how could he know? But why does that matter? Doesn’t an officer have to err on the side of defending against a lethal threat? The suspect had a hold of the officer’s Taser, refused to let it go, while resisting arrest.

So, what’s with the judge focusing exclusively on “escape.” Although it’s a part of an officers’ duty to prevent criminals from escaping, in that case, fighting an armed criminal (he would not let go of the officer’s Taser), the officer was in a fight for his life.

“He probably wouldn’t have,” just doesn’t work for me.

Anyway, how could he be trying to escape rather than fight the officer when the evidence shows the suspect would not release the Taser. If he simply wanted to escape, he could have let go of the Taser and run. He chose not to.

How do I know that might have happened? Because it happen to cops—all the time. For example, a suspect stole an officer’s Taser in 2020, during a high profile police shooting in Atlanta. The suspect shot the Taser at the officer but missed.

Now, here’s my “nutshell” version of the incident from my earlier article:

From beginning to end, the officer scaled the use-of-force continuum as if he were demonstrating it for a fresh police academy class. Officer presence, verbal commands, then hands on. After a foot pursuit, he tackles the suspect and attempts to arrest him—with no weapon other than hands, arms, and legs.

The suspect continues to resist, so the officer deploys his Taser, which the suspect thwarts by grabbing it and refusing to let go. Clearly exhausted (you can hear the officer’s heavy breathing in the video), not about to risk his life by allowing the suspect to steal his Taser, and then maybe his gun, he uses lethal force to stop what the suspect started—and refused to stop.

In the original NPA article, I wrote, “And that’s not saying I or any other officer would have done the same thing. It’s saying, based on training and experience, it appears the officer performed his duties properly and in good faith. The result was tragic, yes. But the suspect, not the officer, set the tragedy in motion with his actions.”

Also, we’ve all seen video of when good citizens come to the aid of police officers in trouble. During the video, what appeared to be a large male comes outside from his house and watches the officer struggling with the suspect. After watching for a few moments, he goes back inside. If he’d been a good citizen and helped the officer, Loyoya would likely still be alive.

I know. That’s not very likely to happen. But that doesn’t make the assertion untrue.

Which emphasizes the officer also had to be wary of both that neighbor and Loyoya’s passenger who got out of the car and videorecorded portions of the incident. I understand it’s farfetched to believe the passenger would help a cop subdue his friend. However, like the neighbor, by choosing not to help the officer, a man is now dead.