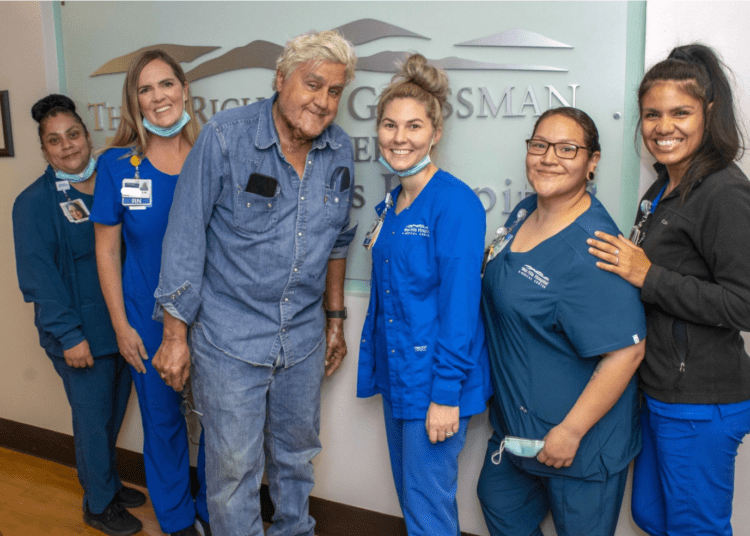 LOS ANGELES – More than a week after suffering “serious burns” from a gasoline fire in his garage, Jay Leno was discharged from a Los Angeles area hospital, according to reports.

Grossman Burn Center staff members who offered medical care for Leno shared a photo alongside the comedian where everyone was smiling, KTLA reported.

“After a 10-day stay at the facility, Jay will receive follow-up care at the Grossman Outpatient Burn Clinic for burns to his face, chest, and hands he received during a fire at his home garage,” physicians said in a media release. “Jay would like to let everyone know how thankful he is for the care he received, and is very appreciative of all of the well wishes. He is looking forward to spending Thanksgiving with his family and friends and wishes everyone a wonderful holiday.”

“I am pleased with Jay’s progress, and I am optimistic that he will make a full recovery,” Dr. Peter Grossman, Leno’s physician, noted.

Treatment for the comedian included a surgical excision and grafting procedure, which removes unhealthy tissue to facilitate healing, and time spent in a hyperbaric chamber, according to the news outlet.

One of Leno’s employees told a journalist at KTLA that it was a steam car that caused the problem. Fuel was reportedly used to produce the steam, and the longtime “Tonight Show” host was sprayed with some gas that ignited.

LOS ANGELES – Legendary funny guy Jay Leno is being treated at a Los Angeles burn center after he suffered injuries from a car fire over the weekend, according to reports.

Leno was in his Los Angeles garage on Sunday when one of his many automobiles unexpectedly burst into flames, TMZ reported. The left side of the comedian’s face was burned, but the flames didn’t “penetrate his eye or his ear,” a source told the news outlet.

The lovable comedian had to pull out of a Sunday performance at the Financial Brand Forum 2022 in Las Vegas due to the incident, according to multiple sources, KTLA reported.

“His family was not able to provide us very many details, but there was a very serious medical emergency that is preventing Jay from traveling,” according to an email read to attendees of the conference, which People obtained on Monday.

“All we know is that he is alive, so our prayers go out to him and his family tonight.”

Leno is recovering at the Grossman Burn Center in Los Angeles, TMZ reported. The optimistic performer commented on his injuries.

“I got some serious burns from a gasoline fire. I am ok. Just need a week or two to get back on my feet,” the former “Tonight Show” host said in a statement to Variety Monday morning.

Leno owns a legendary automobile collection that boasts over 180 exotic cars, hypercars and museum-grade artifacts. “Put simply, nobody else in the world has a space-age McLaren P1 parked near their antique fire engine,” reported U.S. News earlier this year.

The Hollywood icon also hosts a YouTube channel that says, “Jay Leno’s Garage is the place where Jay shares his passion for all things automotive.”