‘I’ve got a big gun pointed at your head, does it really matter if you think I’m a cop?’ 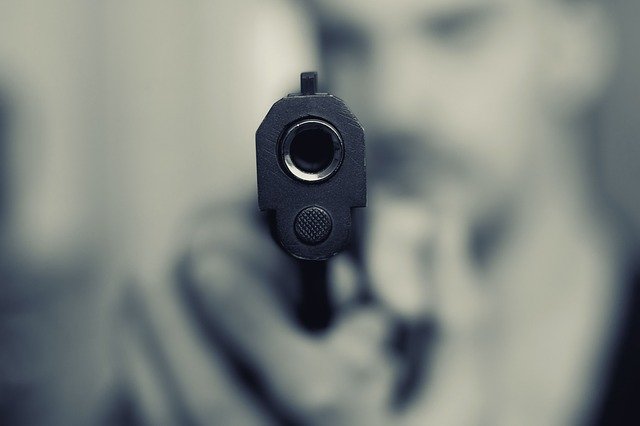 The crown jewel of the City of San Francisco, at the intersections of elegant commerce, urban glory, and civic pride, is a place called Union Square.

All four sides of this centerpiece park are bounded by internationally famous hotels such as the Fairmont, stores such as Nordstrom’s and Macys, and many Michelin starred restaurants.

During the holidays, it has a 4-story tall Christmas tree, with bazillions of twinkling lights in the center, surrounded by bejeweled shoppers from around the world.

Given all that, it’s naturally the perfect place for an armed robbery that involved a bicycle chain, stolen cutlery, and a gang of dazed and confused criminals.

I was working as an Inspector with my partner, Laurel. We both enjoyed working for the Special Investigations Division unit called “Night Investigations” because we only caught really interesting just-occurred felony cases and had two of the best bosses in the Bureau.

Night Watch for us always started off with coffee at the Pinecrest Café on Geary Street on the edge of San Francisco’s small theatre district. Being as how it was a week before Christmas, the foot traffic and traffic scene was more than usually insane as we crawled our battered Crown Victoria just even with Powell Street.

As I watched a Cable Car covered with Christmas lights lurch past us, I mistakenly said to my partner:

“Quiet night so far, hopefully it will stay that way.”

That was very stupid of me.  No sooner than I mouthed that wish, than the Police Curse took over.

The car radio started shouting that there was an “In-progress armed robbery in the center of Union Square, any 10-8 unit call out and respond.”

The only thing that can beat the Police Curse, is its happier big brother, Police Karma.

We were literally AT Union Square, by the southwest staircase, and lookie-lookie, mygawd, the bus zone at the corner was momentarily vacant.

A blur of arms and elbows shut the car windows, grabbed Kell lights, and told Dispatch that 4 Adam 11 was at the robbery location.

Union Square is about the size of a city block (an acre?), and had hundreds of nooks, crannies, out-buildings, and patches of tall shrubbery. The megalith that was the burning pile of lights Christmas Tree colored all this area with weird multicolored shadows, while canned musak, and the sounds of a busy city at night made it even more fun.

None of the Christmas shoppers seemed to pay any attention to two Suits like us, running like crazed gerbils looking around for somebody robbing someone.

Here, there, over-where: Nothing visible until we got to the actual geographic center of the park

“Armed robbery in progress in the CENTER of Union Square.”

In the flashing shadows we suddenly saw a couple of elderly civilians, with the man holding his arms in the air, and his equally terrified female companion cringing against his chest. Opposite them were several dark clad shorter men, semi-ringing the victims against a park bench. The closet thug held something brandished in his right hand and was waving it like a whip menacingly at the woman’s throat.

As I pulled out my large horse pistol, Laurel muttered “right side” and ran off softly to flank the crime scene.

I counted to 20 seconds or so, studying things like places I could cover from, and background angles if it came to me having to shoot someone.

I knew that if the bad guys did something stupid before Laurel was set up, it might hurt the couple. It could even make our counter-ambush into a gun waving foot chase, or even a hostage event.

Finally, gritting my teeth, and taking the element of surprise at its fullest, I rushed out of the shadows where I had been standing into a more visible area closer to the thugs, while pointing my gun and my flashlight at them.

“Police Officer!!!  Put your hands up and get on your knees!”

Now, I’m sure I said more profane and insulting things to the robbery guys at that exact moment, but that’s what the police report said that I announced, so I’m sticking to that rendition.

In slow motion, the guy who had been “waving something” turned towards me, and started walking in my direction, while his colleagues chattered amongst themselves at this sudden distraction.

Hmmm, not what I expected.

From this guy’s point of view, here is this older looking guy, holding something dark against the dark cloth of a battered suit coat, yelling that he is a Police Officer.

He said in heavily accented English:” I don’t believe you f***ing cop.”

He now had a puzzled look on his face as he tried to interpret what I said, which I hoped would turn out to a good thing.

Timing is critical in these things, so when my partner suddenly materialized between the crooks and their prey, waving her trademark Combat Commander auto gun, while growling something in Spanglish, I was smilingly relieved.

The three guys looked suddenly VERY unhappy and realized that they were boxed in by armed gringos. As they grudgingly complied with orders to “manos ariba” and get on “el terra,” my knucklehead stopped advancing into my line of fire, and tuned his head towards Laurel.

I took a quick step towards him and swung my right hand.

My .357 Model 23 is about 3 pounds of blued steel, not counting the after-market custom fitted handgrips.

When swung against the head/temple area of someone who is not expecting such a dull-surprise, it makes a more-than effective club.

But then I already knew this from previous experience.

As before, my “improvised impact weapon” had the desired effect, so when my problem child was stunned enough to slump to the ground, he immediately met up with my handcuffs.

I was a little surprised to see that his right hand was holding a long, dirty, and rusty bicycle chain. He had apparently seen too many cheap Gladiator movies and was swinging this chain trying to intimidate the elderly couple.

Me, I wouldn’t want to get hit in the face with this improvised metal whip, so I understood how they felt.

The other three thugs had dinner forks wrapped around their fingers, with the tines pointing outward like a set of improvised brass knuckles.

When we had taken this call, and just before we started our un-choregraphed dance with the crooks, Laurel had put out our exact location, number of assailants, and requested a “Code Three cover response.”

I had added to this hurried broadcast that there were plainclothes cops involved, and therefore (hopefully) no-one would shoot us when the cavalry arrived.

Over the din of the recorded Christmas Carols, I could have heard the roar of multiple sirens and large bore V-8 engines coming our way.

(And I would have subsequently also have heard a Black and White car knocking over a very large metal garbage bin at the Montgomery Street Union Square entrance.)

Uniformed cops were now popping up from over bushes, down staircases, and around the Christmas tree.

As fast as you could say Kris Kringle, all the suspects were cuffed, searched, and subject to the sight of 20 cops high-fiving each other while pointing and laughing at the (obviously now) very drunk crooks.

Mr. and Mrs. Victim were interviewed, and then gently walked to their suite at the Fairmont, while I found out that the improvised fork-knuckles came from Tad’s bargain basement Steak House about 2 blocks away.

I never did find out what local bike was missing its chain.

The Central District Radio car that ate the garbage bin, was quietly towed away with nary a blink from the City Shops tow driver, who apparently liked Jack Daniels.