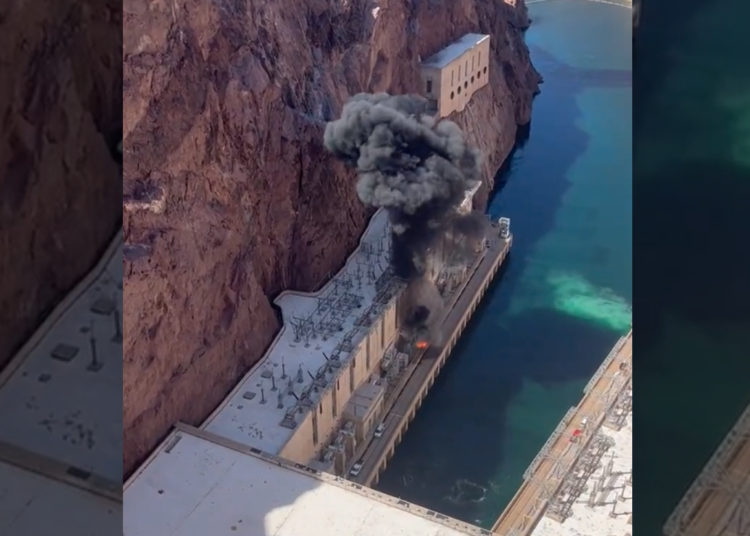 An investigation is underway after an explosion occurred and black smoke billowed from a picturesque site at the Hoover Dam, which is located in the Black Canyon of the Colorado River on the border between Nevada and Arizona.

People visiting the area caught a glimpse of the explosion and its aftermath from different vantage points.

“My goodness, something’s just blown up,” a voice said in a video recorded by one tourist who heard the explosion, the Western Journal reported.

touring the #hooverdam and heard an explosion #fire pic.twitter.com/1tjWuNWBaZ

The Bureau of Reclamation provided the following press statement:

“At approximately 10 a.m. (PDT) the A5 transformer at Hoover Dam caught fire and was extinguished by the Reclamation/Hoover fire brigade at approximately 10:30 a.m. There are no injuries to visitors or employees,” the release said.

“There is no risk to the power grid, and power is still being generated from the powerhouse. We are investigating the cause of the fire and will provide additional updates as they are available.”

William Herro, 13, who was visiting from San Francisco, said he heard a “big boom,” the Las Vegas Sun reported.

“A ton of black smoke just exploded in the air. It looked almost like a mushroom and then a fire followed,” Herro said.

Officials say no one was injured and there was no risk to the power grid. https://t.co/1ZPxaTh7pm pic.twitter.com/DANzBOobvr

A photo of firefighters on the scene appears to show the transformer on the exterior of the lower dam structure. The fire broke out on the Arizona side of the dam, according to the Vegas Sun.

A Bureau of Reclamation spokesman Doug Hendrix said dam management and engineers were assessing the damage and investigating how the fire began.

“We quickly, with our fire suppression equipment and with our fire brigade, we were able to put the fire out,” Hendrix said. “Fires are rare in power plants, but they are not out of the ordinary.”

After the dramatic explosion and subsequent fire occurred, tourist Adrienne Maples of Overland Park, Kansas, said her tour group was told to remain in place, according to the Western Journal.

“We had just come out the power plant and were waiting in the hallway,” Maples said. “We didn’t really know anything was up, but we were in the hallway for an unusually long period of time. We were actually already in a shelter area.”

“They said it was contained and there was no reason to worry. Nobody panicked,” Maples said.

Following the explosion, tours of the dam were suspended for the rest of of the day. However, officials are hopeful they will commence on Wednesday.

The Hoover Dam was completed in 1936 after six years of construction. It straddles Nevada and Arizona, and generates hydroelectric power, as well as impounding Lake Mead, the source of drinking water for nearby Las Vegas.

The recreational area recently made headline news as the water level has dramatically receded and two sets of human remains were discovered along the dried up shoreline of the lake.

After the remains emerged within a week earlier this year, some people began to speculate that it could have been a dumping ground for organized crime figures, who have a well-documented history in Sin City, Law Officer reported.

“There’s no telling what we’ll find in Lake Mead,” former Las Vegas Mayor Oscar Goodman said in May. “It’s not a bad place to dump a body.”

Goodman, as a lawyer, represented mob figures including the ill-fated Anthony “Tony the Ant” Spilotro before serving three terms as a martini-toting mayor making public appearances with a showgirl on each arm.

Thus far there have been no reports that Tuesday’s explosion and fire at the historic dam is connected to foul play.