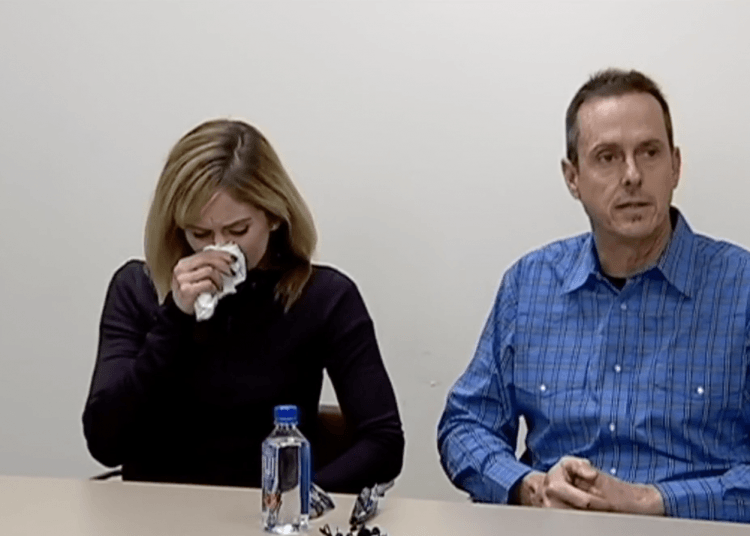 Lindsey Duncan, right, and his wife Molly provide brief details of the shooting, which led to the death of Robert and Cheryl Sanders. Greene County Sheriff's Office classified the case as a "justified homicide." (Screenshot Dayton Daily News)

YELLOW SPRINGS, Ohio – A Hollywood stunt double for Cameron Diaz, Charlize Theron, Jessica Alba, Uma Thurman, among others was killed in a shootout Wednesday in Ohio, according to multiple reports. The stuntwoman, who also appeared in “Back To The Future II,” and her new husband were deemed to be the aggressors causing bullets to fly.

During a Friday press conference, Duncan described the unexpected confrontation at the gate to their property. He and his wife were returning home and stopped to pick up mail and a delivery at the gate when Reed, allegedly wearing a mask and hoodie, held a gun to his wife’s head.

While providing a brief overview, Duncan said he responded “instinctively.” As a result, several rounds flew by Molly’s head and she is lucky to be alive.

“All I remember was a 6-foot-something 6-foot-5 man, that was probably 230 pounds with a camo mask, a full camo mask and hoodie on, ran to my wife’s driver’s side with a gun, and held it about 10 inches from her head. And I thought it was a bad nightmare. I didn’t know what to do. Whatever happened after that was instinct,” Duncan said.

“I will tell you she (Molly) was in the middle of two separate gun battles, of bullets flying by her head, four inches, five inches, six inches by her, not one time but two separate times. And her being alive today, I’ll never be able to explain that. And it wasn’t one shot or two shots, it seemed like a hundred shots and there were shells everywhere. And that’s all I can really say, and I’ve probably said too much but that’s enough.”

“The word ‘ambush’ is exactly what it was,” Molly Duncan said at the press conference. “We were caught off guard. They said nothing and they started shooting at us.”

Reed Sanders was reportedly shot first, before Cheryl, who was armed also arrived and was killed in the gunfire, police said. They were both shot and killed by Duncan, the Dayton Daily News said.

A great stuntwoman died. RIP Cheryl Sanders. Her ex-husband shot her and her new husband in a dispute about money for their daughters’ college https://t.co/mFkFk0ukcd

A former business partner with Sanders, Adrian King said the shootout stemmed from a dispute over college funds for the daughters of Lindsey and Cheryl. Molly Duncan said the couple didn’t say anything when the gunfire began.

Police didn’t respond to questions regarding the statement by the Duncans (below), although a crime report lists the case as a “justifiable homicide.”

Even after the shootout described as “sudden hell,” the hardest part for Duncan is “having to tell my two daughters that their mother’s [Sanders] been shot,” according to Dayton247now.

Authorities recovered three firearms and were looking for surveillance video, police said. They said that Lindsey Duncan has a concealed carry permit.

Women In Stunts, a website dedicated to women stunt performers made a statement following her passing.

“It is with a very broken heart that we share that Cheryl Wheeler Sanders was killed by gunfire on February 12, 2020, the statement said. “She was a dear friend and a wonderful person who often dealt with more in life than anyone should have to deal with.”

At the outset of his statement Friday, Duncan thanked the Greene County Sheriff’s Office, saying, “They have been incredible. This has been a very trying time for myself and my wife, and they have been so supportive, the victim’s advocacy people, the investigators, the seven or eight hours of interviews, which seemed like 20 hours of interviews. … They did it with kid gloves and with care. And so they have been wonderful, and they have made us feel safe and protected in a situation where I can promise you, you don’t feel safe and protected at all.”