Laine Hardy was booked on Friday 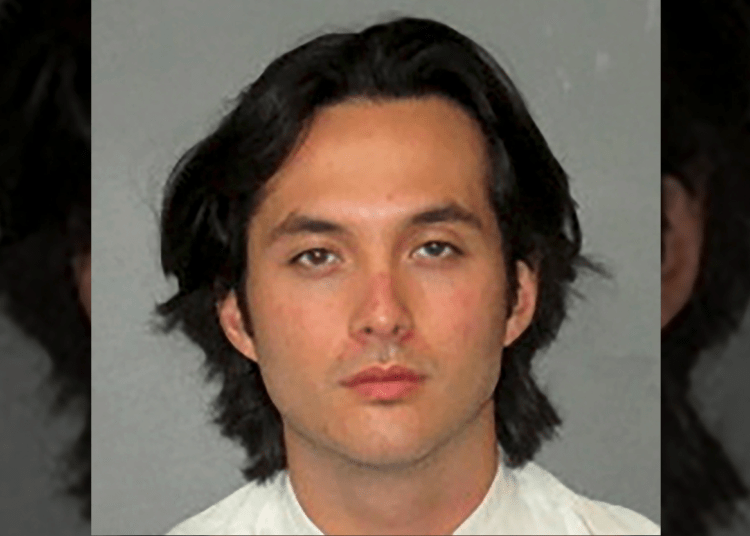 BATON ROUGE, La. – “American Idol” winner Laine Hardy was behind bars Friday. He is charged with planting a listening device in his ex-girlfriend’s living quarters at Louisiana State University.

Hardy’s former flame found the voice recorder at her campus accommodation this month, which led to the arrest of the 21-year-old country crooner, according to the New York Post.

The female student is not named in the booking document released Friday by the 19th Judicial District Court in East Baton Rouge.

LSU spokesman Ernie Ballard said in a statement: “Laine Reed Hardy (Non-LSU student) was arrested by LSU Police today and booked into East Baton Rouge Parish Prison for violation of 15:1303 — Interception and Disclosure of Wire, Electronic, or Oral Communication. His arrest warrant has been filed with clerk of court.”

The singer is accused of planting a listening device at his ex-girlfriend’s campus accommodation at Azalea Hall in order “to monitor her conversations” when they broke up, after dating from November 2021 through February 2022.

According to booking documents, “the victim advised that last night, while watching a movie with her roommate, [they] located a device, appearing to be a phone charger under the victim’s futon.” After googling the device, “she learned it to be a VR-500 Voice Activated Recorder,” the Post reported.

Furthermore, the booking paperwork said that in mid-February, “the victim … found a fake Instagram on the Defendant’s phone that he used to cover up that he was illegally recording her when he was not around.”

It’s noteworthy that Hardy reportedly “had information about the victim and her actions during Christmas break that was not known to the defendant.” When the female student “confronted” Hardy he “admitted that he left a ‘bug’ in her room (and) later discarded it in his pond,” according to court documents.

Once the victim discovered the device remained in her room — she reported the crime to LSUPD. Investigators discovered audio of his “distinguishable voice” and heard his name being repeated by other parties. On the second to last recording, dated Feb. 2, the “victim is heard telling someone about how she figured out the Defendant was recording her” — but she “doesn’t know if the bug is still in her room.”

After booking, Hardy was released from custody on his own recognizance. it was unclear when he is scheduled to appear in court.

BATON ROUGE, La. – “American Idol” winner Laine Hardy appears to be getting out in front of a negative news story by preemptively making an announcement Thursday that he is under investigation by the Louisiana State University Police Department.

Hardy, 21, disclosed the news without offering any specifics in a Thursday night Facebook post, saying the LSUPD issued “a warrant due to allegations made against me.” 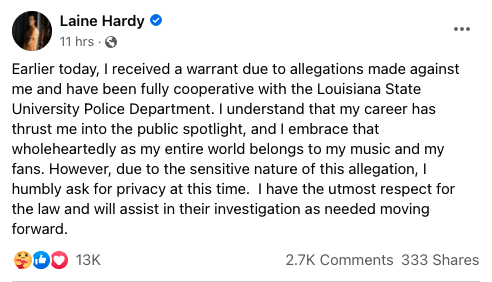 Law enforcement authorities and university representatives told The New York Post they can “confirm there is an active investigation with LSU Police” and they “may be able to provide more information later today.”

Hardy’s reps told the news outlet they could not comment on the “pending investigation.”

However, his attorney C. Frank Holthaus confirmed that “Mr. Hardy did receive a warrant for his arrest [Thursday] and has been and will continue to be completely cooperative with the Baton Rouge Police Department on this matter. Due to the public nature of Mr. Hardy’s profession, we ask for privacy at this time.”

Hardy, a Louisiana native, won season 17 of ABC’s “American Idol” in 2019 and is known for his hits “Memorize You” and “Flame.”