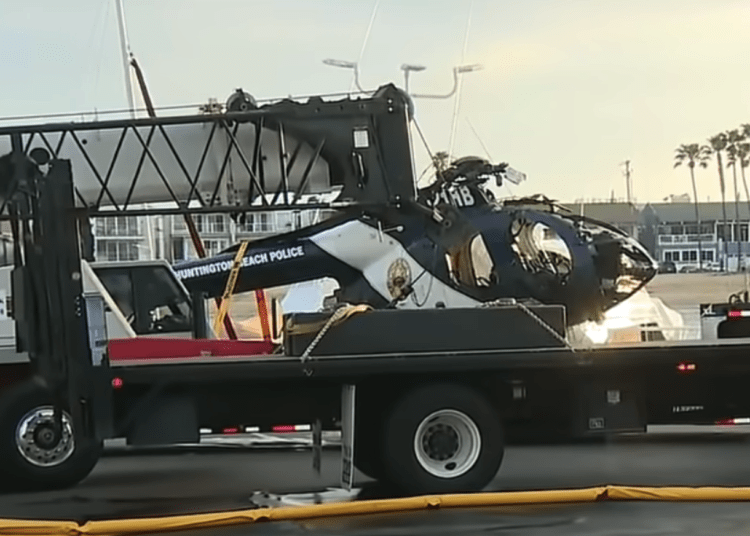 A second officer-crew member was seriously injured in the crash, but was released from a hospital Sunday morning, police said.

The second officer has not been publicly identified, and it’s unclear who was piloting the airship when it went down.

“This is a difficult night for all of us and I would ask for your prayers and support as we support our officers’ families,” Parra said late Saturday.

Although details have not been disclosed regarding injuries to the surviving officer, Huntington Beach Police spokeswoman Jennifer Carey told the members of the media that officials “are optimistic about his recovery,” according to Fox News.

HB1 — the identifier for the police chopper — was responding to a disturbance in the neighboring city of Newport Beach around 6:30 p.m. Saturday when the aircraft crashed in a narrow strip of water in Newport Bay between Lido Isle and the Balboa Peninsula.

Nearby boaters rushed to their aid in an effort to rescue the officers, which landed upside down in shallow water.

The pilot made a brief call to report the helicopter was experiencing mechanical trouble. He transmitted again saying they were going to crash, according to National Transportation Safety Board spokesperson Elliott Simpson during a Sunday news conference.

Preliminary reports indicate the chopper made “a nose-down descent into the water,” Simpson said.

Recovery crews used a crane to hoist the damaged helicopter from the shallow water on Sunday.

NTSB said the ultimate cause of the crash will not be determined until their investigation has concluded, which could take 12 to 18 months, KTLA reported.

HBPD has three helicopters and typically keeps one in service 24 hours a day. The additional aircraft will be grounded pending an inspection and the preliminary investigation, Parra said.