Police returned fire and the suspect was critically wounded 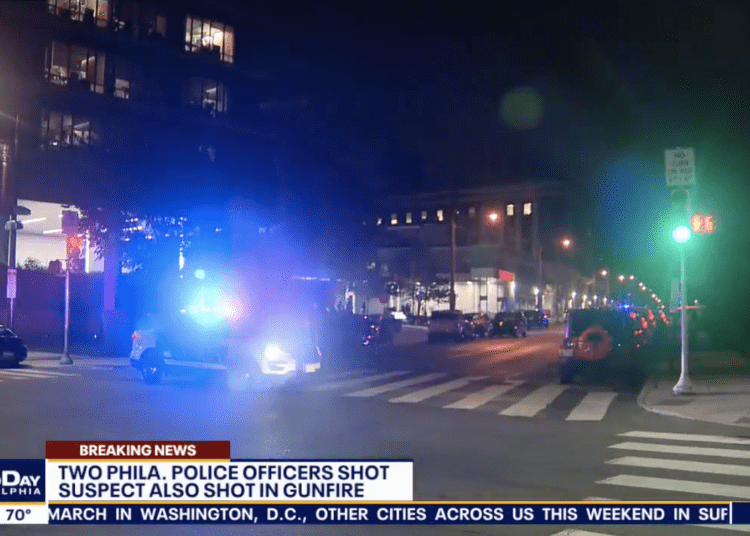 PHILADELPHIA — A scrubs-wearing gunman who opened fire inside a Philadelphia hospital early Monday, killing a colleague and wounding two police officers during a subsequent gun battle, has been captured, according to reports.

The initial shooting occurred at 12:10 a.m. on the on the 9th floor of Thomas Jefferson University Hospital. The suspect was described as a male 55-year-old nursing assistant who was wearing scrubs and body armor when he fatally shot a 43-year-old fellow nursing assistant shortly after midnight, NBC Philadelphia reported.

The armed gunman fled the medical facility and took off in a U-Haul box truck. About an hour later, a passerby in West Philadelphia’s Parkside neighborhood flagged down police, who confronted the armed man, Police Commissioner Danielle Outlaw told reporters.

Armed with a rifle and a handgun, the suspect opened fire at officers, wounding two. Four officers returned fire and struck the gunman in the upper body and neck, according to Outlaw, New York Post reported.

The suspect was listed in critical condition but also is expected to survive, police said.

One officer was shot in the shoulder and the other was struck in the nose, but they are both expected to recover, according NBC Philadelphia.

PPD detectives are investigating a motive in the shooting.

“We do believe that other employee was targeted. The reasons why, at this point, we still don’t know,” Outlaw said, according to 6ABC.

FOX 29 reported that one of the officers was shot in the elbow and would require surgery.

“We learned that he was wearing body armor and was carrying multiple weapons. In addition to the long gun, which was believed to be an AR-15, he was also carrying some form of a semi-automatic handgun,” Outlaw said.

“We do believe that we don’t have any other outstanding shooting offenders or suspects from the Jefferson Hospital [incident]. We’re not looking for anyone else at this time and that’s all we know,” the commissioner concluded.