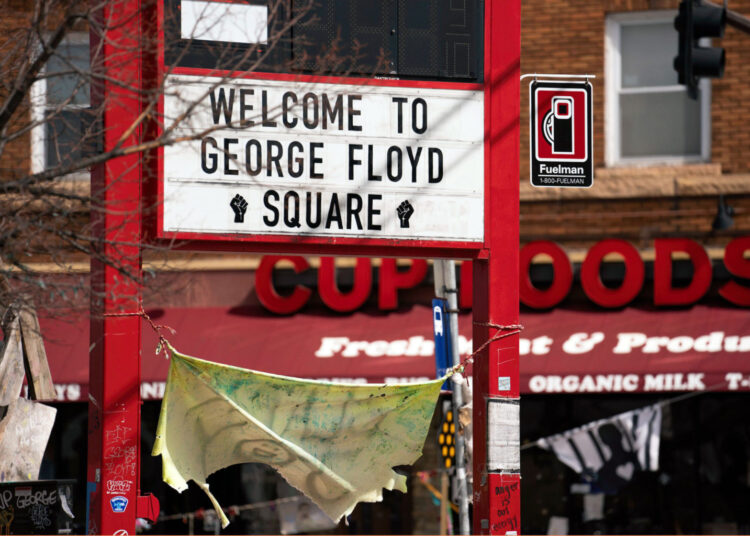 A "Welcome to George Floyd Square" sign at the intersection of East 38th Street and Chicago Avenue in March 2021. (Lorie Shaull/Flickr)

“Trained conservators” from the Midwest Arts Conservation Center are preserving “burned scraps of paper” left at George Floyd Square as Minneapolis prepares the site to host a permanent memorial.

Activists have been insistent since the beginning of the square that “the smallest scrap of paper or the smallest Post-It note written in crayon” are worth saving. Such relics have even been described as “offerings” by mainstream outlets like MPR, Minneapolis Magazine, Vogue, The Minnesota Daily and The Star Tribune. “Handwritten signs” and “works of public art” left at the intersection where Floyd died are also being protected, per the city government, which describes 38th and Chicago as “a sacred space.”

Meanwhile, the city is undertaking a larger project called “38th and Chicago Re-Envisioned,” which aims to “balance traditional asset management needs with the intersectionality of justice, healing, placemaking and culture.” The “Project Fact Sheet” detailing this effort was released on the city years,” stretching into 2023, amid a series of “listening sessions” and “public meetings.”

These public engagement efforts have yielded a series of “key findings,” objectives that interested parties seek to achieve as the redesign takes place. These include “reduced vehicle traffic” around the square, efforts to protect businesses in the area, and meeting the “24 Demands for Justice” that protesters posted outside the square when they completely barricaded it to outsiders last summer. These demands include $400,000 for various social justice causes and the firing of city officials whom activists oppose.

The city has also clarified that while the 38th and Chicago project itself will not install a Floyd memorial, it will “reorganize the street and surrounding public space within the ROW to accommodate a future memorial(s). The forthcoming memorial process will be closely coordinated as a separate but parallel effort from this project.”

Meanwhile, crime remains a persistent issue around the intersection — and one that community members have asked the city to remedy. MPD reports eight shootings inside a two-block radius around the square so far this year.

Last month, a man was stuffed into the backseat of his own car by three attackers, detained in an abandoned gas station at the square, assaulted with a hammer and screwdriver, and forced to withdraw money from an ATM. The assailants then started using drugs as they drove around in the victim’s car, taking him to different ATMs.

Police have released the names of two of those involved: Larry Mosby and Desmond Graham. When Mosby passed out after apparently overdosing, Graham took him back to the gas station and lit him on fire in an apparent attempt to wake him up. This failed to revive Mosby, who died in the square.

Law Officer is honored to partner with AlphaNews as they report on law enforcement stories from the Minneapolis Area. Find out more at: www.alphanews.org