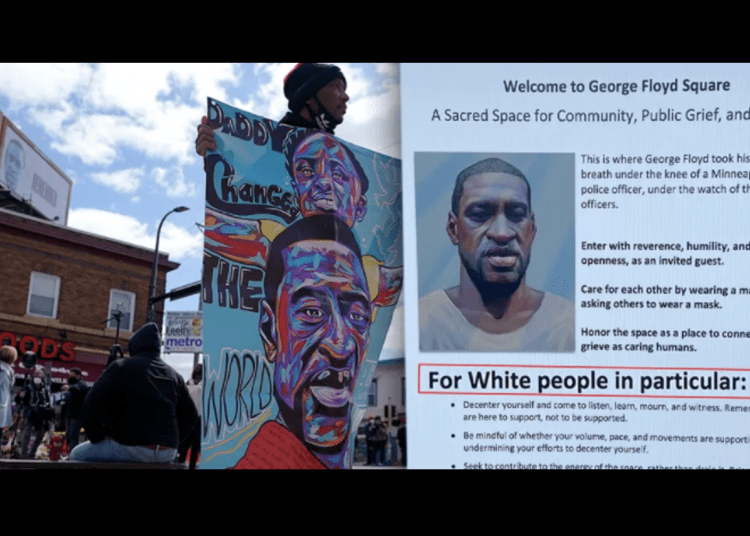 The now infamous intersection of E. 38th Street and Chicago Avenue was converted into a memorial and renamed George Floyd Square shortly after his death.

A sign near the entrance of the Square welcomes visitors to “A Sacred Space for Community, Public Grief, and Protest,” Fox News reported.

White people about to enter George Floyd square are given special instructions pic.twitter.com/3gzpwqUmtS

The sign notes that the area is where Floyd “took his last breath under the knee of” Chauvin, who was found guilty Tuesday of multiple charges in Floyd’s death.

The sign urges visitors to “honor the space as a place to connect and grieve as caring humans.” However, it includes a special set of instructions for white people.

White visitors need to “decenter” and “come to listen, learn, mourn, and witness.”

“Remember you are here to support, not to be supported,” the sign reads.

White people are asked to “contribute to the energy of the space, rather than drain it.” Any “processing” must be brought to “other white folks” so that “BIPOC” (an acronym for “Black and Indigenous people of color”) are not harmed.

If white visitors see their fellow white folks doing “problematic things” they are encouraged to “speak up with compassion to take the burden (off of) Black folks and our siblings or color whenever appropriate.”

White people are finally encouraged to “engage rather than escalate, so that it can be a learning moment rather than a disruption.”

The sign, according to Fox News’ Matt Finn, who posted the photo on Twitter, is not the only one of its kind singling out white people who want to honor the space.

Since Floyd’s death, the area has been converted into an “autonomous zone” that’s brought record levels of violent crime and gun violence to the neighborhood.