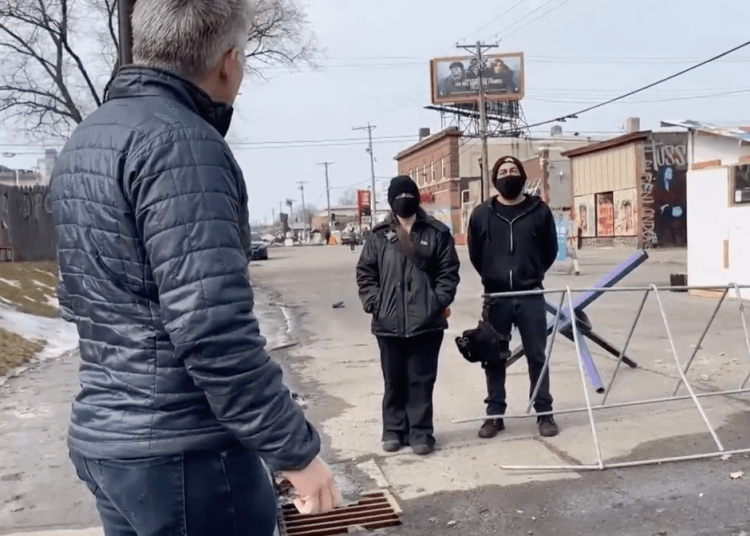 MINNEAPOLIS — Left-wing militants have reportedly turned a memorial site for George Floyd in Minneapolis into a “volatile” autonomous zone — where police, the media, and even other protesters aren’t welcome, according to reports.

The memorial, called George Floyd Square, popped up in the days after the 46-year-old’s custodial death on May 25 — the catalyst for a global movement against law enforcement.

But since then, a militant-style group has taken over the blocks-long site, creating a hostile situation for authorities and protesters alike, NewsNation Now reported.

“The situation at the memorial, from what I understand, is its kind of volatile,” Kim Griffin, a Minneapolis resident, told the news organization. “People that want to go and support doesn’t feel a sense of inclusion. There is more of a like militant-type atmosphere over there and a sense of fear.”

Griffin said her nephew, Imez Wright, was gunned down within the zone over the weekend — and that activists blocked police from responding.

NewsNation now reporter Brian Entin was recently reporting from the autonomous zone — which surrounds East 38th Street and Chicago Avenue, where Floyd died — when he was confronted by two activists dressed in all black.

We’re media,” Entin said, according to a video he posted on Twitter and shown below.

“I don’t give a f–k who you are,” one of the protesters replied. “You need to get in your car and go.”

The George Floyd memorial is an "autonomous zone" with several blocks controlled by activists. Police don't even go in. We tried to respectfully get video-but left after two people confronted us near the barricades.
Later learned many protestors don't even feel comfortable there. pic.twitter.com/5w32fxQ0hR

Those guarding the zone have refused to reopen the area unless the city meets a list of 24 demands — including recalling the county prosecutor and dedicating hundreds of thousands of dollars into “fighting racism, supporting affordable housing and creating jobs,” the network reported.

The activists reportedly plan to keep the area closed until trials are held for the three other officers charged in Floyd’s death. Those are scheduled for August.

“The thing about it is that a lot of the different demands are asks from different people, and black folks aren’t monolithic,” said Jeanelle Austin, a leader of the autonomous zone. “So it’s really incumbent upon our city leadership to really look at the needs behind the asks, and really fulfilling those needs.”

In essence, militants are holding the city hostage, but local governing authorities have allowed it.

Nevertheless, officials have vowed to reopen the zone after the trial for Derek Chauvin concludes.

She said officers have faced “protests, resistance, opposition” from occupants in the zone, prompting them to avoid policing the area.

Last year, there were 19 nonfatal shootings in the area — 14 of which occurred between May 1 through August 31, according to NewsNation Now. There were just three shootings in 2019.

Marcia Howard, who is said to be a retired Marine who quit her job as a teacher to become one of the zone’s organizers, claimed that officers haven’t been impeded.

“Injustice closed these streets, and only justice can open them back up,” Howard told NewsNation Now.

A similar protest area — dubbed the Capitol Hill Autonomous Zone, or CHAZ — formed in Seattle’s Capitol Hill neighborhood last year. Activists there frequently clashed with police until the lawless zone was dismantled after a month of occupation.

The group was incensed last week when city officials apparently served them a notice to vacate the city property with an 11-mile perimeter. “In case it’s not f***ing clear, we are not f***ing going anywhere,” said one of the group’s leaders.