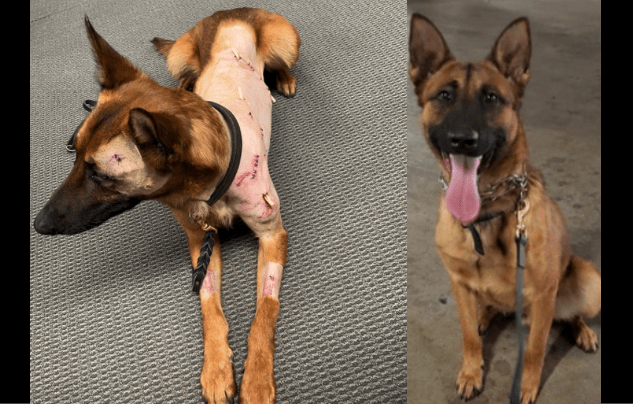 FRESNO, Calif.  — A Fresno police service dog (PSD) is recovering after receiving multiple stab wounds and the suspect in the viscous attack has been charged with several crimes.

Carlos Adrian Castanos, Jr., 30, is facing  a felony complaint in connection with a series of domestic violence incidents taking place on March 6, 2021 and April 10, 2021.

Fresno police responded to a domestic violence report involving Castanos on April 10th. As officers arrived, Castanos attempted to escape through the backyard.

K9 Argo was deployed to capture the fleeing suspect. Police say Castanos used a box cutter to stab and slash at Argo causing wounds to his eye, front leg, and back.

Despite the attack, Argo was able to maintain his hold on Castanos which helped Fresno officers take the suspect into custody.

However, Argo was severely injured. As a result, he was rushed to a local animal hospital where he was treated for his stab wounds. Fortunately, he is expected to make a full recovery.

According to KMPH, the criminal complaint alleges that Castanos committed the crimes of:

Castanos has a prior convictions for domestic violence and robbery.

At the time of his arrest, Castanos also has pending charges for Second-degree Burglary and Evading a Peace Officer, according to court records.