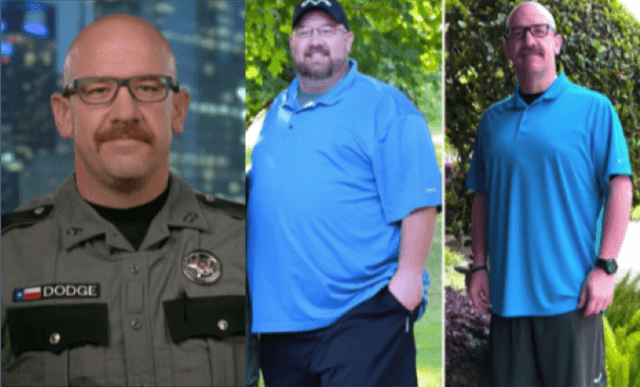 Dodge’s passion for law enforcement sparked when he was covering a story at the Montgomery County Police Academy a few years ago.

Appearing on “Fox & Friends” Thursday, he told host Ainsley Earhardt: “Just covering a lot of stories about law enforcement and becoming friends with a lot of law enforcement agencies and their workers. And, I realized that that’s what I wanted to do. It was a calling.”

According to Fox 26, by the next class Dodge was in training for the Citizens Police Academy. Dodge graduated, underwent gastric bypass surgery, and started to diet and work out.

At that point, he couldn’t do a sit-up or a push-up.

“I had something I needed to do, wanted to do, had to do,” he told Earhardt.

He went through Houston Community College Police Academy. He came back to try out for Precinct 4 and didn’t make it.

Several months later, he returned to the range and reportedly came in first on every aspect of the process.

Deputy Dodge began his journey tipping the scales at 470 pounds. On Tuesday morning he was was sworn in and started his patrol duties that evening, weighing a stealth 220 pounds, Fox 26 reported.

He encouraged those looking to undergo a similar transformation to “keep going” and reach for their goals.

“I really am just learning, because I have no experience in law enforcement beforehand,” he explained. “So, it’s all fresh to me. Even at 42 years old learning something new is exciting.”