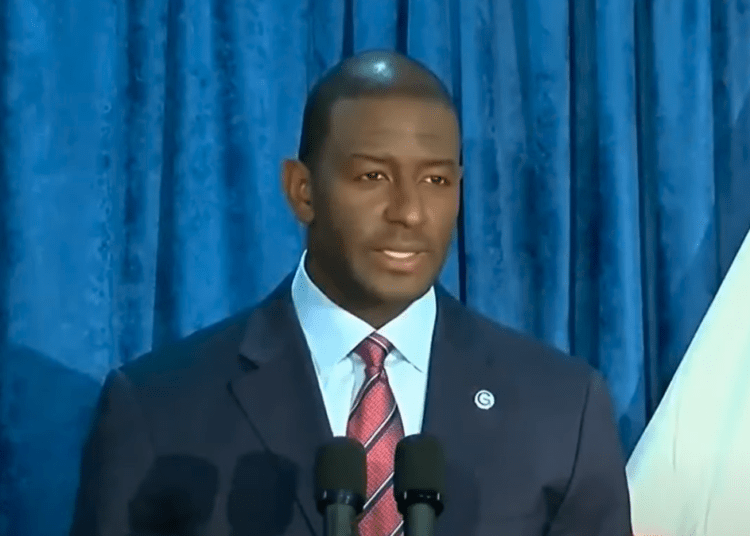 TALLAHASEE, Fla. – Andrew Gillum, who barely lost to Ron DeSantis in Florida’s 2018 gubernatorial race, was indicted on federal charges involving campaign contributions he and associates unlawfully solicited from undercover FBI agents during a long-running investigation into public corruption in Tallahassee.

Gillum, 42, is facing one count of conspiracy, one count of lying to the FBI, and 19 counts of wire fraud, the Department of Justice announced Wednesday, according to a local report from the Tallahassee Democrat.

“The Indictment further alleges the defendants used third parties to divert a portion of those funds to a company owned by Lettman-Hicks, who then fraudulently provided the funds, disguised as payroll payments, to Gillum for his personal use,” a Justice Department press release said.

Federal prosecutors did not go into details regarding the criminal charges, but said the acts took place from 2016 to 2019, Fox News reported.

Furthermore, the feds said charges are based on campaign contributions that Gillum and Lettman-Hicks reportedly solicited from undercover FBI agents, according to the Tallahassee Democrat.

Gillum and Lettman-Hicks surrendered and were taken into custody Wednesday by the FBI. They both made a court appearance at the U.S. Courthouse in Tallahassee in the afternoon where they each pleaded not guilty to federal public corruption charges.

U.S. Magistrate Judge George Stampelos ordered pretrial release with conditions for the co-defendants. As of now a trial date was set for Aug. 16, although it is likely to be re-scheduled to a later date.

Gillum made a comment saying, the case “was not legal, it was political,” according to MSNBC.

Gov. Ron DeSantis has successfully led Florida in several measurable ways since he won the 2018 election by the slimmest of margins. He received 49.6% of the vote to Gillum’s 49.2%, a difference of slightly less than 35,000 votes statewide.