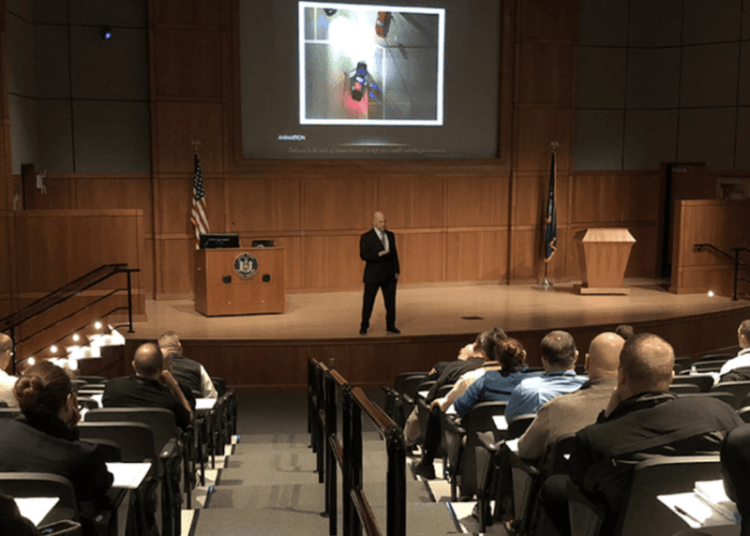 With 30 years in law enforcement (and as a voracious advocate for training), there isn’t much I haven’t seen.  Unfortunately, through the years, I have walked away disappointed from highly touted training courses more times than I care to count.  So, when the opportunity came to attend the Force Science Certification Course, while I didn’t hesitate—I was still skeptical.

I’ve been very vocal about the need to enhance law enforcement training to the highest level, and, as a trainer on the road for the last 20 years, I have heard that same sentiment from thousands of cops.  My experience and disappointment with decades of law enforcement training fueled my skepticism.  No matter how well-established they appeared to be, Force Science was not getting a pass.

Upon entering the first day of the 40-hour course, I was handed a 355-page book that would help guide the week’s training.  The class was a mixture of law enforcement from every rank, district attorneys, defense attorneys, and a host of civilian employees from across several states.  Any skepticism I may have had from other training courses was eliminated within minutes of starting our training.

Topics
The information provided was too extensive for me to do anything other than scratch the surface here.  The best way I could describe it is that each day was like drinking out of a firehose.  I quickly understood why we were given a large textbook on the first day; because it would be mandatory to review the information each evening and beyond to retain the jewels provided during the week. 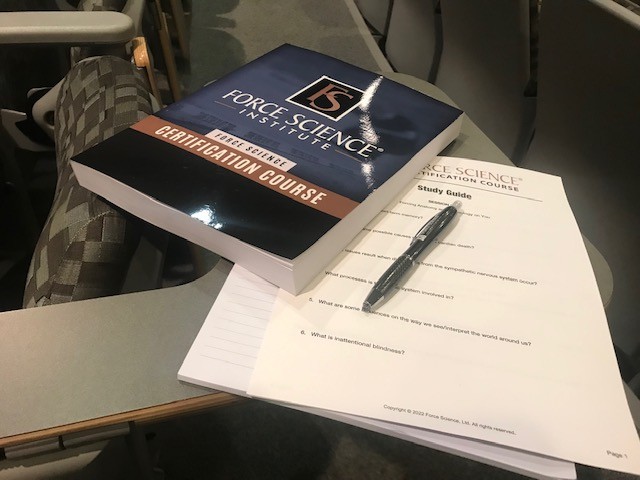 Over the forty-hour course, the topics included the principles of biomechanics, crisis encounters, human performance, cognitive interviews, anatomy, and physiology.  It’s difficult to describe the detail that each training module provided, but it was clear that unless you went to medical school or spent years in research, the knowledge given is unprecedented.

Expertise
The level of expertise in each course area was unmatched by any course I had ever taken.  It is extremely rare for any training environment to successfully mix trainers from various backgrounds and attain a singular mission, but Force Science has far surpassed what anyone else has ever been able to do.  Law enforcement professionals such as Craig Allen and Mike Musengo have matched decades of experience with the concepts at Force Science.  Their mixture of theory and practical application was excellent.  The ability to ask questions to Dr. Ed Geiselman, the founder of the Cognitive Interview Technique, was worth the price of admission alone.  Adding to the already impressive faculty was Dr. Robert Pettitt, a renowned expert in human performance, and Dr. William Bozeman, a medical trauma expert.  The information was new, relevant, and pouring in at a rapid rate each hour.  Attorney Laura Scarry, who I have known for many years, is an absolute expert in police litigation and risk management.  As a legal advocate and police trainer, Laura is legendary.  Her time in front of the class was not only entertaining, but her expertise reflected insights that can only come from representing over a hundred police officers in the moments immediately after their critical incidents and the years of litigation that can follow.

No one has made a more significant impact on modern-day law enforcement than the founder of Force Science, Dr. Bill Lewinski.  After four decades of groundbreaking work involving human performance, use of force investigations, and training, it would be understandable if Dr. Lewinski chose to stay home and watch the legacy of his life thrive.  He has certainly earned that right.  But Dr. Lewinski is anything but retired.  In addition to his ongoing research projects, Dr. Lewinski continues to educate the profession.  In the last two days of certification training, Dr. Lewinski brought everything that had been learned up to that point to a crescendo of understanding.

Who Should Attend
I have been in law enforcement supervision and management for 26 years and am responsible for evaluating and recommending use-of-force incidents to this day.  Frankly, I am embarrassed that I waited this long to take this course, but my embarrassment gives way to my anger when I consider that leaders with the responsibility of judging the actions of law enforcement have either ignored or flat out refused to attend this training.  Whether it’s our own administrators, the courts, the media, or activist organizations, their quick and harsh judgments of police officers are too often based on naïve and unrealistic expectations.  For those who claim to want accountability, there is no way that anyone, including myself, could fairly and honestly judge an officer’s performance without understanding how human response and behavior are impacted by stress and rapidly evolving environments.  This course provides that knowledge.

The Force Science Certification Course is a rare opportunity to learn from industry-leading experts and be introduced to the scientific research that should drive investigations, decisions, opinions, and judgments following a use of force incident.  Force Science aims not only to conduct its own research but to identify and incorporate outside research affecting force investigations.  After all, doctors, pilots, and ordinary car drivers benefit from human factors research, psychology, medicine, and behavioral sciences.  Unfortunately, those that wear the badge are too often disciplined, charged, and even imprisoned by people with no knowledge of the human factors research enjoyed by other professions.

Controversy
I would be remiss if I didn’t address the manufactured “controversy” that periodically follows Force Science in select media outlets.  In the wake of the anti-police protests and riots that were occurring in 2014, the New York Times published an opinion piece that questioned Force Science’s commitment to police accountability.  It seems that the 2015 article, titled “Training Officers to Shoot First, and He Will Answer Questions Later,” was intended to leave readers with the impression that Dr. Lewinski and Force Science were willing to use unreliable research to defend any officer, regardless of the facts.

Despite Dr. Lewinski’s attempt to correct the record with author interviews, affidavits, and peer-reviewed research, the publishers refused to edit the piece.  (They reportedly explained to Dr. Lewinski that opinion pieces don’t need to be correct.)  Nevertheless, media outlets unaware of the background (or unconcerned) will periodically cite the New York Times article as evidence that Force Science research and training is “controversial.” Missing from these stories is any mention that “expert” critics, including those paid $1000 an hour to testify against Force Science, have been forced to admit under oath that they are unaware of any research that disproves or discredits Force Science findings.  Despite their protests, critics of Force Science are unlikely to identify any instance in which Force Science training caused an officer to use excessive force or prevented honest accountability.  Instead, Force Science is criticized for failing to support policies or standards that ignore the realities of science and human performance.

Ironically, while the media and just about everyone else promote their opinions and feelings to judge others, this course does none of that.  If we are supposed to “listen to the science,” it’s hard to understand why anyone would ignore the research presented by Dr. Lewinski and the Force Science faculty.  (Some of which have existed for over 100 years!).  While Force Science uses the proceeds from training to commission police-related studies, those studies have built on thousands of research projects conducted by professions outside of law enforcement.

Life-Changing
Attending the Force Science Certification course was life-changing, something I do not say lightly.  As a 30-year law enforcement veteran, I had all but given up that anything would have impacted me the way this course did.  As a law enforcement administrator, trainer, and expert witness in several areas, I take great measures to ensure that I know the latest information within the profession.  After spending a week studying with the Force Science faculty, I realized that I have a lot to learn, which is a good thing.  The parting wisdom by Dr. Lewinski will stay with me for the rest of my life: “Information is useless without using it.” I’ll spend the rest of my days using the tools I was given, and I will be forever grateful for what Force Science has done to teach us that science has a lot to add to the law enforcement community.

Travis Yates is the author of “The Courageous Police Leader” and former ILEETA Trainer of the Year.