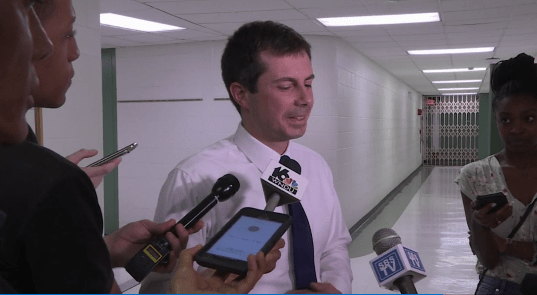 SOUTH BEND, Ind. – On Sunday evening, South Bend Mayor Pete Buttigieg faced criticism at a town hall from angry community members who are unhappy with how he has handled the fatal police shooting of Eric Jack Logan on Father’s Day.

On Monday evening, the 37-year-old presidential hopeful found himself facing more harsh criticism from local police who claim that his interest in the shooting of the 54-year-old black man at the hands of a white police officer is purely political. Moreover, the local FOP believes his approach to the tragedy has only created greater division.

“For Mayor and Presidential Candidate Pete Buttigieg to make disparaging remarks such as ‘all police work and all of American life takes place in the shadow of racism’ is divisive,” wrote the Executive Board of the Fraternal Order of Police Lodge No. 36 in an open letter shared on the South Bend FOP’s Facebook page.

“Mayor Buttigieg’s comments and actions are driving a wedge between law enforcement officers and the community they took an oath to serve.”

IndyStar has reached out to Buttigieg’s campaign and is awaiting a response.

The shooting that has led to public unrest and caused Buttigieg to briefly suspend campaigning happened shortly before 3:30 a.m. on June 16. Police were called to the 100 block of North William Street after dispatch received a report of a suspicious person going through cars.

As a result of the call for service, South Bend Police Sgt. Ryan O’Neill responded to the scene and confronted a man, later identified as Logan. Police said he was partially in a vehicle in the Central High School Apartments parking lot.

Officials said Logan stepped out of the vehicle with a knife in his hand and approached O’Neill with the weapon raised. Consequently, O’Neill stepped back and ordered Logan to drop the weapon, according to police.

However, they assert that Logan did not comply. Therefore, O’Neill fired his service weapon and struck Logan.

Following the shooting, Logan was taken to Memorial Hospital, less than a mile away, in a squad car. Nevertheless, he was pronounced dead at the hospital.

O’Neill was treated for minor injuries and discharged, according to the prosecutor’s office. The nature of O’Neill’s injuries remain undisclosed.

Although O’Neill was equipped with a body camera, it did not activate. Additionally, due to the time and location of the OIS, there have been no witnesses located, reported IndyStar.

In Monday’s letter, the FOP executive board explains that the shooting is being investigated by an outside entity, and that they are standing in support of O’Neill until “a thorough and complete investigation is done.”

The board members say that throughout the process, Buttigieg has failed to devote any of his attention to other local crimes, including multiple shootings at Kelly’s Pub that left one person dead, 10 others injured and a hospital on lockdown early Sunday.

Furthermore, the board says that the mayor has not spoken to O’Neill’s family, or the “South Bend Police Family.”

The board ends the letter by saying that every officer is held to a high level of accountability, and that they are committed to building long-term trust in the community.

“In a short time, Mayor Buttigieg will no longer be the leader of this great city. However, the South Bend Police Department and the residents of South Bend will still be here,” says the letter. “If we grow and change for the better, it will require us to set political agendas aside and simply come together.”