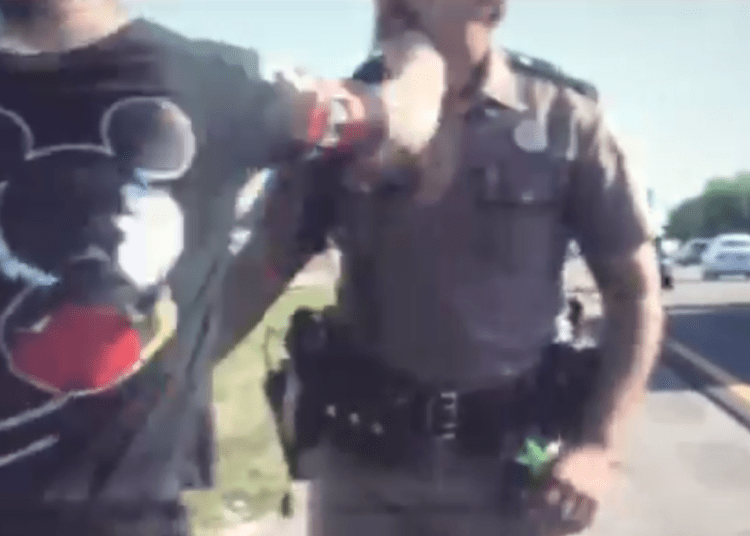 Dashcam video shows the suspect punching the trooper in the face before the fight continues off-camera. (Florida Highway Patrol)

TAMPA, Fla. – A trooper of the Florida Highway Patrol was attacked by a man who was detained for walking on the interstate in Tampa on Friday. The police agency is sending its gratitude to a group of good Samaritans who stopped to assist during the confrontation.

Dashcam video of the encounter shows the trooper informing the man, identified as Alexander Hernandez Delgado, 24, that he can’t walk on the interstate, Fox News reported.

Delgado said he was walking on the roadway because his mother kicked him out of the house, the trooper wrote in an arrest report.

Alexander Hernandez Delgado, 24, was arrested and charged with battery on a law enforcement officer and resisting an officer with violence.  (Florida Highway Patrol)

“I then searched the subject and attempted to place him in the back of my patrol car. The subject became argumentative and stated that I am bothering him and that he would like to be left alone,” the trooper noted. “The subject then pulled away and then threw a punch with his left hand that [struck] me in the face.”

The video shows Delgado striking the trooper in the face before the fight goes off-camera in the median. While the confrontation was out of view of the dashcam, the trooper indicated that Delgado struck him several more times, Fox reported.

The two come back into view of the camera with the trooper on top of Delgado. As the fight continues, a trucker and other motorists stopped to aid the law enforcement officer subdue and control the combative suspect.

“The FHP thanks all the Good Samaritans that stopped on I-4, in both directions, on Friday morning, March 18th in Tampa to help our Trooper,” a spokesman for the FHP said in a statement.

Fortunately, the trooper didn’t suffer anything worse than a a bloody nose during the encounter.