Finally, a Car of Our Own 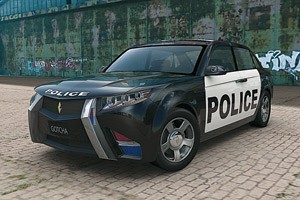 In the past few issues, I’ve reviewed a number of vehicles developed by the major automotive manufac­turers to address the law enforcement marketplace. These vehicles are all excellent choices for today’s patrol fleet, with great strides made in comfort, performance, economy and technological compatibility. However, the fact that these vehicles are compromised can’t be ig­nored. Major automotive designers, no matter how passionate or well intentioned, can’t get around the fact that mainstream vehicles must meet the needs of the average consumer. Certain as­pects of a vehicle’s design can be modified or enhanced to better meet officers’ needs, but the over-all design must sat­­­­­isfy mom-and-pop Amer­ica for manufacturers to recoup design and production costs.
This balance between meeting consumer and professional needs within the same automotive platform has been tricky to maintain. Consider this: For every police vehicle chugging down the assembly line, that same spot could be occupied by a civilian version that carries more content, a higher price tag and a better profit margin. Fortunately for us, manufacturers derive a great sense of pride in developing and providing law enforcement vehicles, and they maintain that what is learned on the gritty streets of policing makes for better performing civilian models.
As law enforcement officers, we want to use what works. We understand what a police vehicle needs to do because we use one everyday, whether on Minnesota’s frozen streets, in the humid Louisiana bayous or on the tire-melting asphalt ribbons of Arizona. So, what if someone developed a vehicle designed for officers, by officers, with some heavy-hitting automotive personnel behind it?
Enter Carbon Motors. This Atlanta-based company has developed its solution to the need for a vehicle specifically designed for law enforcement. Code named “E7” (the company intends to hold a contest in the future for law enforcement agencies to help name the vehicle), this vehicle is well on its way to becoming a reality.
To find out more, I contacted William Santana Li, Chairman and CEO of Carbon Motors. Li, like many of the personnel at Carbon Motors, has extensive experience working with one of the Big Three manufacturers, which is critical. In the past, other entities have certainly been willing to develop solutions, but, as you can imagine, the leap from drawing board to the production line is massive. In Carbon’s case, its entire staff is filled with automotive executives who have spent decades designing, developing and manufacturing vehicles for major car companies.
Despite all this experience, Carbon Motors understood that to design the best vehicle for officers, it needed to go directly to the source. So, the company created the Carbon Council, which is the E7’s think-tank. Li says that the current design is the result of input from more than 400 law enforcement agencies, ranging from some of the biggest to the smallest. In fact, Li says some of their best ideas have come from the smallest agencies. I say current because the E7 design is still evolving, with input from the Carbon Council continually guiding the final design.
The premise behind the E7 is simple. Li says other public safety professions have vehicles specific to their needs, such as firefighters. With more than 19,000 police agencies in the U.S., and more than 800,000 officers, the need for a job-specific police vehicle was obvious. According to Li, Carbon Motors wanted to create a turn-key solution for agencies that offered a long service life, low cost of ownership and excellent functionality for officers. Li says it’s “unacceptable” to him that, six years after Sept. 11, there still isn’t a police vehicle on the streets made specifically for law enforcement. He also knows that most agencies are budget-driven, so low operating costs and better efficiency for the vehicle were also two important criteria. The design of the E7 is meant to address the needs of officers while making it appealing to the bottom-line.

The Outside
The E7 looks all business. With angular lines, integrated front and rear push bars, and pronounced roof line, the E7 definitely conveys a rough-and-tumble industrial image. The overhead lights are integrated into the roofline for lower noise, better fuel economy, protection from the elements and a stealthy profile. Although the photos here show a colored light bar, one can imagine that a monochromatic version with clear LED panels would function well for directed-enforcement endeavors.
The profile of the E7 clearly shows that the designers worked hard to place the wheels and suspension at the far corners of the car. This feature creates better stability, a smoother ride, less front and rear overhang, and more room for occupants. The wheelbase of the E7 measures 122". By comparison, the wheelbase of the Crown Vic measures approximately 114.7" long, giving the E7 eight more inches to work with. What is more telling is that the overall length for the E7 is 200" vs. 212" for the Crown Vic. Although the E7 is a foot shorter, it has much more space between the front and rear suspension. The height on the E7 is 64.2" vs. 56.8" for the Vic. As the photos show, its high roofline should translate into excellent interior headroom, which is critical for tall drivers and mounting overhead racks, cameras, etc. This roominess is confirmed when comparing rear headroom: 38.5" vs. 37.9" on the Vic, and front headroom, 40" vs. 39.3".
The weight of the E7 is listed at an even 4,000 lbs., which is due, in part, to an aluminum spaceframe designed to withstand 75-mph rear impacts. The E7 weighs about 129 lbs. less than a Crown Vic. It’s important to note that the E7’s weight includes all of the law enforcement specific-equipment because it’s integrated into the car, unlike the Vic’s 4,129 lb. curb weight. So, the E7 is a lighter, shorter, stouter-looking vehicle than the popular Crown Vic.

Engine/Drivetrain
It’s here where the E7 makes a dramatic shift from other police offerings. It employs a high-tech clean diesel engine for its power plant that can run on biodiesel. Now, unless you’ve had your head buried in the sand for the last few years, you should know there are many tangible benefits to a diesel engine. First, as Li points out, the service life is more than double that of the average gasoline engine. Diesels in big rigs can go a million miles or more without major service, and Carbon Motors’ forced induction, ultra-low sulphur engine is designed to meet the E7’s projected service life of 250,000 miles. Second, patrol vehicles spend a good deal of time idling, so a diesel makes sense because diesel engines are traditionally low rpm, high-torque engines. This means they burn fuel at a very low rate, and, with the average patrol vehicle running nearly 24/7, the fuel savings can be immense. Third, diesel engines make a lot of torque. The E7’s engine delivers 300 horsepower and a whopping 420 lb.-ft. of torque. Coupled with a six-speed automatic, the E7 is projected to hit 60 mph in the mid six-second range, while topping out at approximately 155 mph. The ample torque also means that, in slower speed city environments, acceleration will be brisk off the line.
The diesel’s fuel economy is also a well-known benefit, with the E7 projected to garner fuel economy numbers much higher than the typical 10–12 mpg found in the Crown Vic. Fuel capacity on the E7 is 18 gallons, which is a gallon less than the Vic, but this may not matter because of the fuel economy projections.
While the E7’s engine will provide good thrust, the four-wheel vented disc brakes with anti-lock brake system will help whoa the car when needed. The brakes are attached to a four-wheel independent suspension that uses struts and coil springs up front and a multi-link, self-leveling coil spring suspension in the rear. Both ends also have anti-roll bars, and the E7 is projected to have a nearly 50/50 weight distribution. This should translate into excellent handling with minimal brake dive. Other highlights include 18" steel wheels with meaty 245/50R18 tires.

On The Inside
Although the E7 looks the part of a cop car on the outside, the inside is where it gets down to business. Li says the E7 is designed as a package deal that incorporates technology most departments want, while still allowing for some tailoring. Available features and options include NIJ ballistic protection in the doors and dash area, heated and ventilated duty-gear friendly seats, a head-up display, automated license-plate recognition software, video and audio recording of the prisoner transport area, a bio-friendly rear seat, a reverse backup camera and an integrated-weapon mount. Other intriguing offerings include a night-vision compatible interior illumination system, an integrated forward looking infrared system, an integrated partition and a driver-specific intelligent key. Li says the E7 is still in development, but most of the items listed above are logical additions to the patrol vehicle environment.

The Future
The E7 is certainly an intriguing vehicle for the law enforcement marketplace, but it will be a few more years until I can get my hands on one for a full road test. Li says Carbon Motors has identified a 200-acre site in the metro-Atlanta region that will house the production center and the entire company with the support of federal, state and local authorities. He also says Carbon Motors has already accepted pre-orders, and more than 170 agencies have expressed a great deal of interest, including the second largest agency in the nation, the City of Chicago.
Even though the E7 remains in the concept stage, the principals at Carbon Motors certainly have the experience to make the car a reality. As for the cost, Li says the E7 will be comparable to current, fully outfitted police vehicles and will provide a safer, better performing product with 24/7/365 customer service and an overall lower total cost of ownership.
Li also estimates that production of the E7 will begin within three years of the closing of the next financing transaction and urges all officers, administrators and fleet personnel to participate in the development process by joining the Carbon Council at
www.carbonmotors.com/council.htm.
As for the car itself, the E7 represents a landmark in police vehicle design, and I look forward to getting my hands on one.

Does Emergency Response Prepare You for Large-Scale Response?