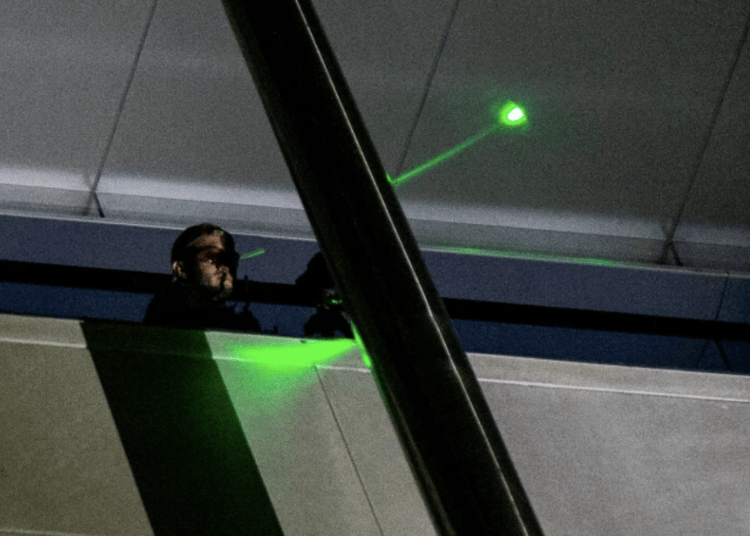 A laser aimed at a law enforcement member watching protesters from a balcony in Portland, Oregon. (EPA)

The deputy director of the Department of Homeland Security said federal officers in Portland suffered 113 eye injuries while guarding a courthouse from activists armed with powerful lasers.

“We’ve had a number of officers who have days-long blindness. So far they’ve all kind of come back, if you will,” Cuccinelli said. “But you also get what’s called flash blindness. Think of it as the old Kodak cameras where you get that blue spot and you can’t quite see your entire field of vision for a period.”

Cuccinelli brought a high-powered laser as a prop to a Senate subcommittee hearing hosted by Sen. Ted Cruz (R-Texas) focused on Antifa violence during protests and riots. He said the devices could be purchased on Amazon.

Although Cuccinelli said all officers recovered their sight, he said activists appeared to be aiming to maximize damage.

“A tactic that quickly developed among the violent participants in these activities was to cut those holes in the shields and instead of standing back at the back of a crowd and aiming at the eyes of officers, they will also now bring the shield up close and bring it right up into you. And so the intensity of the strike to the eyes of the officer is much more significant,” Cuccinelli said.

Law Officer is the only major law enforcement publication and website owned and operated by law enforcement. This unique facet makes Law Officer much more than just a publishing company but is a true advocate for the profession.
Share—and speak up for law & order...
Tags: dhseye injuriesfederal officersKen CuccinelliPortland riots