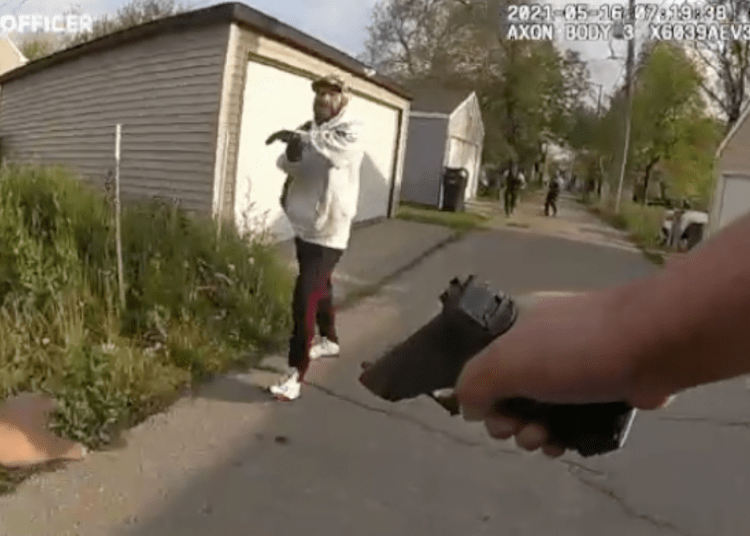 Chicago — The “re-imagining” of the Chicago Police Department is proving to be not only insane, but increasingly deadly. As we recently reported, the new woke-a-doodle foot pursuit policy led to a deadly situation. Due to the new policy, officers could only walk behind a gun-toting suspect block after block as he strolled through Chicago.

The new foot-pursuit policy prohibits chasing criminals unless a specific set of circumstances exist. When officers stepped out a police SUV to confront the suspect, he immediately shot them. Yet Mayor Lori Lightfoot claimed the new policy prioritized the safety of police officers.

However, the brazen behavior of the suspect—who was shocked that police actually shot him—shows just how dangerous Mayor Lightfoot’s idiotic reforms and “re-imagining” has become. And of course, the skyrocketing violent crime throughout the city proves this as well.

The body cam recordings of the incident clearly show just how dumb and dangerous Mayor Lightfoot’s police reforms have become.

However, aside from the absurd policy banning foot pursuits, the Chicago Police use of force policy is also a danger to law enforcement—and the public—because it forces officers to hesitate. And if there is anything that has proven dangerous and deadly for police officers and unfortunate victims of violent crime, it’s hesitation.

For example, the policy states that deadly force can only be used as “a last resort”:

Granted, this may seem sensible. But waiting until the last moment—and making sure deadly force is “the last resort” will get officers killed—because it’s forcing them to hesitate.

Note that the suspect in the recent “walk pursuit” did not hesitate to shoot at officers at point blank range.

Quite simply, hesitating can be deadly.

For example, The Department of Justice commissioned a ground-breaking study in 2006 called Violent Encounters: A Study of Felonious Assaults on Our Nation’s Law Enforcement Officers.

The research carefully studied over 800 violent encounters. Unfortunately, they had something in common.

As one researcher pointed out, hesitation was a prominent factor in officer deaths. And to put it even more bluntly, the researcher concluded, “If you hesitate… you’re dead. You have the instinct or you don’t. If you don’t, you’re in trouble on the street….”

Indeed, a government study evidenced that officers who became victims of violence tended to use deadly force “only as a last resort”—and that hesitation was a key factor in explaining their injuries and deaths.

The 1989 United States Supreme Court Case, Graham v. Connor has long said that law enforcement may use force that is objectively reasonable “in light of the facts and circumstances confronting them, without regard to their underlying intent or motivation.”

By no means does the DOJ study or Graham v. Connor advocate trigger-happy policing, quite the opposite actually. Both are based upon the premise of using the right force at the right time—for the right reason.

This case unfortunately shows hesitation in action. After numerous 911 calls and ShotSpotter reports, and walking behind the gun-toting suspect block after block—and the hesitation to use deadly force as the suspect was aiming a gun—clearly shows just how unrealistic and dangerous Mayor Lightfoot’s police reforms actually are.

Clearly, the public and the police must demand accountability from those demanding accountability because Mayor Lightfoot and other politicians who worship wokeness and ignore reality are getting cops killed.