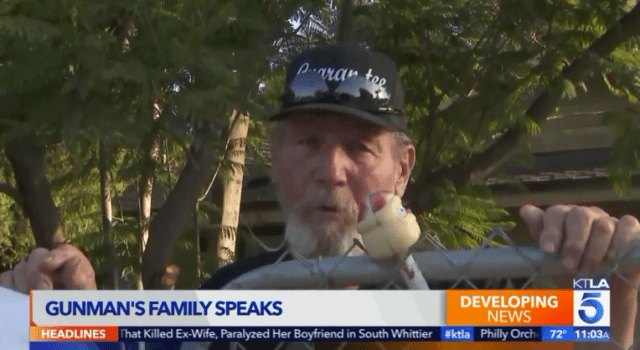 RIVERSIDE, Calif. – The father of the gunman who killed a California Highway Patrol officer Monday said he’s standing behind law enforcement in the deadly encounter.

The cop killer, identified Tuesday as Aaron Luther, 49, of Beaumont, Calif., was driving a white GMC pickup truck Monday when he was stopped by a CHP motor officer on an overpass to Interstate 215 in Riverside. Officer Andre Moye, Jr., 34, was filling out paperwork to impound the vehicle when Luther, who was not restrained, pulled out a rifle and began shooting.

The officer was fatally wounded but managed to call for backup. Two responding officers were also shot in the leg before responding police shot and killed Luther. Moye was rushed to a hospital where he died from his injuries.

Moye had been with the CHP for about three years and was a motor officer for roughly a year before he was killed.

Luther had been convicted for a lengthy list of crimes, including disturbing the peace, vandalism, battery, stalking, unlawful possession of a firearm, assault with a deadly weapon and corporal injury on a spouse.

Moreover, Luther served time in state prison starting in 1994 for attempted second-degree murder and an enhancement for use of a firearm, one count of first-degree burglary and three counts of second-degree burglary, according to the California Department of Corrections and Rehabilitation.

He was sentenced to 12 years but was granted parole in 2004 and discharged from parole in 2007, the department said.

As a felon, he was not supposed to have a gun and his father, Dennis Luther, said he’s not sure how his son came to possess one, KTLA reported.

Dennis Luther said his son had struggled with drugs, was depressed and in pain from knee injuries that left him unable to work his construction job. He also mentioned his son was going through marital problems—something McKenzie Luther pushed back on.

“We’ve been together 14 years—of course we have problems,” she said. “He told me the night before he loved me. He loved our kids.”

“We’re standing behind law enforcement. I can’t imagine a world without police. It would really be a dog eat dog situation. We’re prayin’ … As a matter of fact I said a prayer for the policeman before I did for my son.”

Dennis Luther said despite what his son was going through, his actions were not justified.

“No one deserves what happened to them,” Dennis Luther said. “And if (Aaron) went and did that, he got what he deserved. You don’t go doing that kind of stuff and expect to walk home.”

“We’re standing behind law enforcement. I can’t imagine a world without police. It would really be a dog eat dog situation.” Dennis Luther said in an interview with KTLA-TV of Los Angeles. “We’re prayin’ … As a matter of fact I sent a prayer for the policeman before I did for my son. … It’s just unfortunate that he hurt anybody but himself. … He was on his own and a desperate man. ”

“His mother told me this was his dream job and he loved going to work,” Dance said. “It’s what he always wanted to do.” The officer is survived by his wife, mother, father, stepfather, two brothers, two sisters and a large extended family, Dance said.

CHP Officers gathered outside the emergency room entrance to the Riverside University Health System Medical Center in Moreno Valley on Monday, where Moye was pronounced dead. CHP motorcycle officers lead a procession from the facility that evening.

McKenzie Luther said her husband called her after Moye pulled him over for driving alone in the carpool lane. He said he was also being ticketed for having an expired license and no registration, and his truck was being impounded—so he needed a ride.

But bullets were already flying when her vehicle, with two of her children with her, neared the scene. One bullet pierced the windshield of her car.  Aaron Luther had helped her raise eight children, now between ages 2 and 24. He is the biological father of two of them, the Press-Enterprise reported.

Gov. Gavin Newsom ordered flags at half-staff Tuesday at the state Capitol in Sacramento and called Moye’s death devastating. Newsom, who took office in January, said he’s already been to “too many” funerals of officers killed in the line of duty, reported Fox News.

Riverside Police Chief Sergio Diaz said Monday that authorities do not have a motive. Dennis and McKenzie Luther both said their family member might have been seeking “suicide by cop.”

However, regardless of his disposition, he proved to be more than “suicidal.” He was also a homicidal gunman. Just ask the family of Officer Moye.