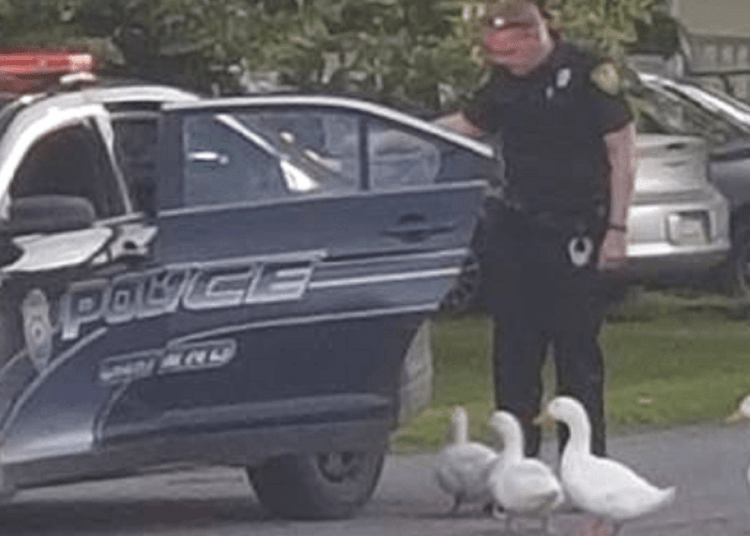 You don’t have to get along with everyone at work, but if he is your boss, has a bad temper and carries a gun, it’s a good idea to try.

People in the Cop World who are leaders inspire either trust and confidence, or make you want to piss into their shoes if you get a chance.

Sgt T was one of those guys who should never leave his combat boots unattended.

The street cops at Mission station came in a number of sizes and body types. The ones who survived the best tended to be on the more beefy and physically fit side than the flabby desk-bound-bureaucrat models.

Sgt T was a Desk Jockey, trying to pretend to be a street cop by being abrasive, condescending, and petty.

And then there was his ego.

He knew everything, (even when he didn’t), never got his boots dirty, or his uniform wrinkled, and was the perfect example of a “Leader of Men.”

His specialty seemed to be micromanaging situations that were already resolved, to the extent that we all waited to have our arrests and reports approved when he went on his usual 90-minute lunch break from being the House Sergeant.

All the other supervisors, including the Watch Commanders knew about this festering problem in the making, but in that Sgt, T was “protected” by a heavyweight 3 star at HQ, they properly took the long view, and waited for the troops to solve the problem.

Typically, every other Friday was pay-day, and before we got our salmon-colored paper vouchers, we had a formal inspection.

Everybody had a “going-to-court-uniform” stashed carefully in our narrow metal lockers, protected from the work-a-day stuff we wore normally by black plastic garbage bag coverings.

The court uniform had your valor ribbons, departmental awards, and other geedunk, and was usually one or two sizes too small to wear over your concealed Kevlar body-vests.

Most House Sergeants would let us pass inspections with our slightly tattered, but clean work uniforms.

When it was his turn to run the show, it was put on your best Dress Mess, or explain in a written memo why you didn’t obey Sgt T’s standing order.

We’d stand lined up at attention in the squad room, while Sgt T walked back and forth trying to find hidden errors or an unpressed pair of pants.

His uniform was immaculate of course, including a duty belt that had never left the box in his locker, and still had the sheen of a brand-new equipment issue.

Not content with making paydays into an unnecessary problem, Sgt T decided that the cops at Mission Station were going to be beyond reproach.

He started roaming the off-duty parking lot, noting down that you had a defective windshield wiper, or a loose muffler strap. He’d write down your license plate ID, and check to see if you had any unpaid PARKING TICKETS.

(Note: If you lived in or socialized in our city, it was a forgone conclusion that you had at least 3 unpaid parking tickets. Heck, my marked police car had at least five!)

Then he’d call you into his office (“Shut the door, Officer”) and read you out for what his “investigations” found you guilty of.

The final straw came one day when he kicked Bobby Shoeshine out of the Squad Room just before inspection saying that “civilians were not allowed to witness line-ups.”

This of course meant that 6 or 10 cops got gigged for not having the shined boots that Bobby had been so happily working on beforehand.

The number one topic at the next Beat Cop meeting at Miz Browns diner was therefore what to do about Sgt T.?

We properly rejected (or put momentarily aside) any suggestion that would result in a loss of pension or a prison sentence.

It’s amazing how inventive ten veteran beat cops can get, when put into a revenge and problem-solving mode.

On the days when he wasn’t running the inspections, Sgt T would make it a deliberate point to walk in while we were all struggling with dirty duty boots, and torn BDU’s, and walk out of the Sergeants Locker room 3 minutes later in his brand new immaculate dress uniform.

The Sgts locker room had an unlocked door…

One memorable day, when someone requested that our much-respected captain and senior lieutenant run the inspection, we all were lined up waiting for the formation to be called, when as usual Sgt T walked in grinning with scarcely five minutes before the clock chimed.

Without preamble we suddenly heard the sound of a metal locker being banged and hammered in the Sgts locker room.

A collision between two sheet metal freight trains would have been quieter.

Sgt T came out of the locker room and got into his place in the command rank line looking disheveled and very stressed out in his golfing attire.

Captain Vic gave it his best poker face try when he announced that all present were fit and ready to proceed with the orders of the day, with the exception of you-know-who.

It seems that if you have a combination lock on your locker, and someone unknown takes white-out from the nearby booking office and then obliterates the dial face numbers, then that lock just might be difficult to open.

Before going on a bragging rant about how you are entertaining this high-ranking politician and that heavy weight law enforcement executive at a dinner that you are sponsoring tonight, you might make sure that all of your credit cards haven’t been reported stolen to the NCIC and CLETS criminal data base.

When little things start happening in the closed environment that is a District Police station, astute supervisors take notice.

BD, Big George, Louie, Ron, Mark, and I were requested to “see the lieutenant” one early Monday morning.

Sgt C. and LT H. were waiting for us when we walked in. We didn’t have to be told to close the door to the Chapel.

We were gently informed that it had come to their notice that there might be “things happening that might disrupt the efficiency of certain members of the Station Staff.”

We were also smilingly informed that IF this was indeed happening, it was understandable given the circumstances, BUT that certain things were off limits.

One morning I was working up a Strike Force Team that involved the SF Park Rangers as a key part of the operation. We had the ranking rangers, public works leaders, and such gathered around a big table, when Sgt T walked up, listened casually for a brief moment, and then as he walked away told me (loudly) to “watch out for those ‘wannabe’s’ from the Rangers Unit because they all were failed cops from other jurisdictions.”

An enemy of my enemy is my friend.

Sgt T took the next long four-day weekend off, telling us not to call him, or pester him unless the station was on fire.

Not that he cared.

By a happy circumstance Sgt T’s office was previously an FTO supervisors meeting room. Duplicate keys to that door were available.

Twenty minutes after Sgt T’s BMW cleared the parking lot, an unmarked van from the SF Rangers Unit motor pool backed up to the station’s sally port door, and numerous noisy and writhing bundles were carried into Sgt T’s office.

Quickly thereafter big bags of bird food and pans of water also made that trip.

By the time, the room’s heater had been locked in the highest heat and fan mode, the (8) adult geese from Golden Gate Park had begun to make Sgt T’s office into their new feather and guano covered home.

We had been worried in that the Chapel faced the Sgts office in question and had a huge glass window with a front seat view. Oddly enough, the curtains on that window had been quietly drawn, no doubt to give the Lt a chance to catch up on his paperwork.

Janitors were instructed (with cash in hand) to ignore Sgt T’s office and forget who told them to do so.

Sgt T returned from his mini vacation at 0800 on Tuesday.

The predictable explosion was heard at 0800.30

A supervisor only meeting was called in Captain Vic’s conference room at 0930. It was determined that Sgt T had no personal gear or the like left in his office.

Sgt T was formally transferred to HQ at 1000 hrs (at his request), with paperwork authorizing this move drawn up in advance.

The geese who had been gently stashed in the station’s drunk tank were “re-assigned “back to their lake in the park at 1300.

The Strike Team had an End of Shift party at the (previously closed) Golden Gate Park Beach Chalet that ran from sundown to high tide.

Cops are basically problem solvers. Sometimes we include large white birds to help.