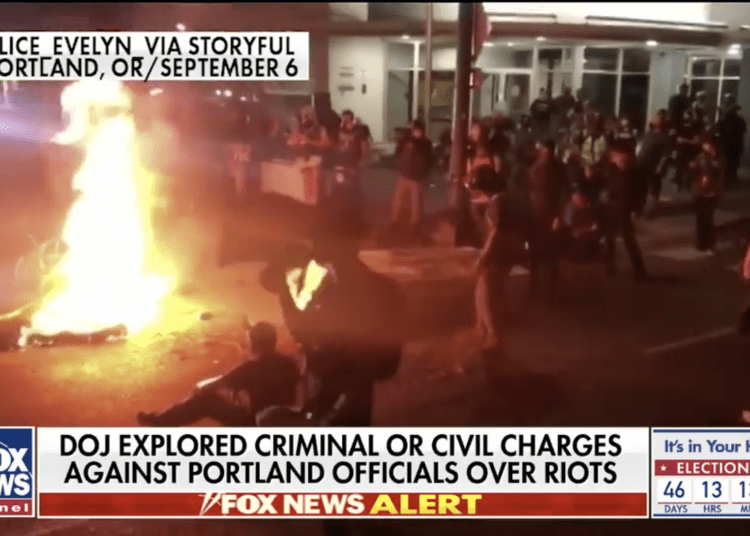 The Department of Justice (DOJ) on Monday identified New York City, Portland and Seattle as “local governments that are permitting anarchy, violence, and destruction in American cities,” a move that comes as the federal government continues to take a tough stance against localized rioting in some areas of the country.

President Trump earlier this month targeted those three cities in a memo to Attorney General William Barr and the Office of Management and Budget asking for a review of federal funding to “anarchist” jurisdictions. The DOJ memo Monday essentially serves as notice that New York City, Portland and Seattle meet the criteria Trump set out for potential defunding, Fox News reported.

It’s unclear what course of action will be taken or whether funding may be withheld from these cities. Moreover, it’s unclear whether such a move would be legal, as it would certainly be challenged in court.

“When state and local leaders impede their own law enforcement officers and agencies from doing their jobs, it endangers innocent citizens who deserve to be protected, including those who are trying to peacefully assemble and protest,” Barr said in a statement. “We cannot allow federal tax dollars to be wasted when the safety of the citizenry hangs in the balance. It is my hope that the cities identified by the Department of Justice today will reverse course and become serious about performing the basic function of government and start protecting their own citizens.”

I’m confirming today that Portland Police abided by my order banning the use of tear gas for crowd control during a protest Friday night in the South Waterfront neighborhood.

Portland Mayor Ted Wheeler has repeatedly called on the violence in his city to end all the way back to May, but has had no impact since he lacks follow though. Furthermore, the progressive mayor has limited the tactics Portland police officers can use in order to control violent crowds, including banning the use of tear gas. The DOJ noted that Portland has now surpassed 100 consecutive nights of unrest.

New York City has had some of the same politically motivated unrest as D.C. and Portland, but the attorney general’s memo largely cites shootings and other crime, while the New York Police Department’s budget has been cut, as the reason for its inclusion on the list, FOX reported.

Barr’s memo cited whether “a jurisdiction forbids the police force from intervening to restore order amid widespread or sustained violence or destruction,” whether ” jurisdiction has withdrawn law enforcement protection from a geographical area or structure,” whether police departments are being defunded and refusal of federal law enforcement help as the evaluating criteria for the list.