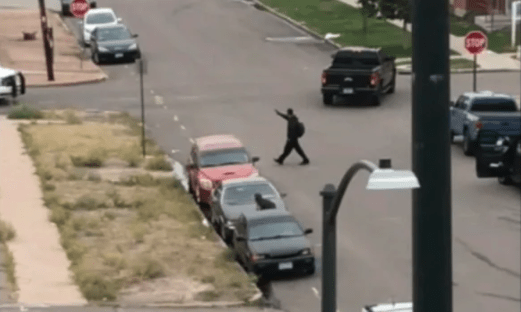 Denver police say this still image from a video shows Antonio Blackbear, 41, brandishing a weapon on Sept. 9. Police shot and killed Blackbear and later learned the weapon was an airsoft gun that looked like a real firearm. (Denver Police Department)

DENVER — Officers of the Denver Police Department engaged in a deadly encounter with a man brandishing a replica weapon in the community. Lethal force was used when the suspect continued pointing the weapon and failed to comply with officers orders.

More than a dozen calls poured into Denver’s 911 communications center after 5 p.m., Sept. 9 to report a man walking down a street near West High School pointing a gun at people, Lt. Matt Clark said.

The man, later identified as Antonio Blackbear, 41, was pointing the weapon at two people in a parked car when police arrived at 5:21 p.m., Clark said. Blackbear turned toward police and walked toward them with the weapon raised and disregarded commands to stop and drop the weapon, police said. Two officers opened fire, and Blackbear was later pronounced dead from his wounds, Denver Post reported.

The weapon was later identified as an Airsoft gun without a safety tip, according to a photo of the weapon displayed by police. The officers on scene believed the gun was real, Clark said.

The two officers have not previously been involved in a shooting and are on modified leave while the OIS is investigated.