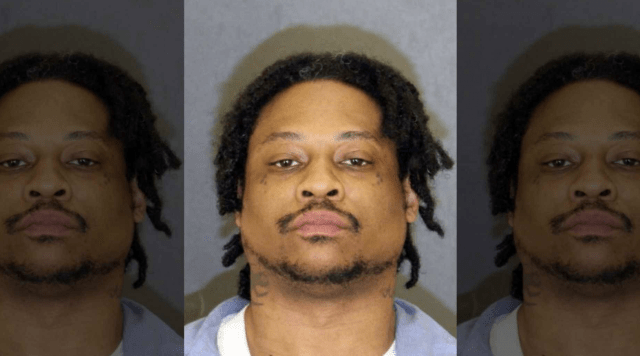 Travis Burroughs, 36, was sentenced Wednesday to life behind bars, with all but 70 years suspended, following his conviction in November on sodomy and false imprisonment charges, authorities say. (Booking photo via WMAR2News)

BALTIMORE – A judge in Baltimore required medical treatment Wednesday after a defendant she had just sentenced to life in prison grabbed a metal water pitcher and threw it at her, striking her in the forehead, according to various news reports.

The defendant, Travis Burroughs, 36, had just received a sentence of life behind bars, with all but 70 years suspended, following his conviction in November on sodomy and false imprisonment charges, according to the Sun.

Burroughs is being charged with assaulting the judge, first degree assault, second degree assault and deadly weapon with the intent to injure, according to WMAR2News.

“We are the enforcement arm of the court, and we will not allow anyone to assault or intimidate any of the judiciary officers here,” Maj. Sabrina Tapp-Harper, a spokeswoman for the Baltimore Sheriff’s Office, told the Sun. “We take this matter tremendously seriously. We will protect this court house and all of the individuals herein.”

Burroughs had been convicted and sentenced last year on second-degree rape, assault and false imprisonment, the news agency reported.

The attorney representing Burroughs could not be reached for comment, the Sun reported.

Tapp-Harper said a sheriff’s deputy and a corrections officer were in the courtroom at the time of the incident and quickly subdued the defendant. She added that the sheriff’s office would be reviewing the case to determine what changes, if any, would be needed in its security procedures to prevent a similar incident from happening in the future.

“After every incident, we always critique the matter to see what we can do better,” she told the Sun.

Burroughs is expected to return to court in January in connection with allegations that he assaulted a corrections employee last May, Baltimore’s WBAL-TV reported.