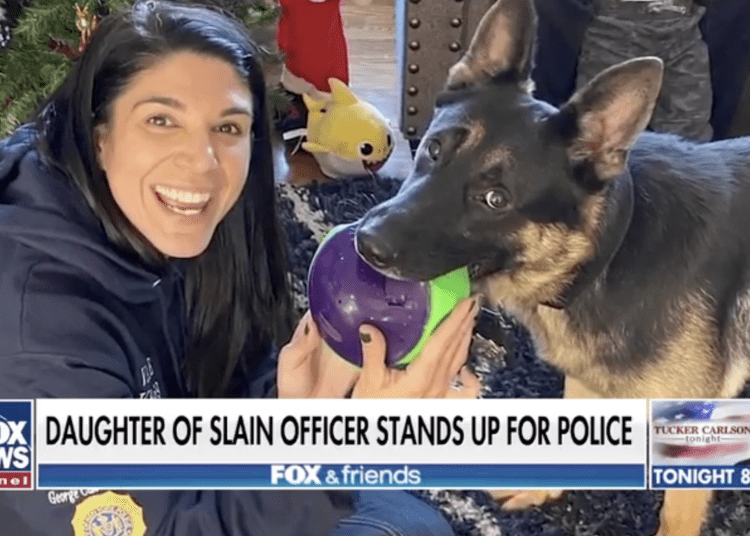 NEW YORK — The daughter of a slain police officer is upset after a New York school district banned staff from wearing a sweatshirt intended to honor her father, calling it “political” because she displayed the “Thin Blue Line” flag.

Carla Caccavale, whose father was fatally shot in 1976 when she was just 20 days old, called out the Pelham superintendent for allowing staff to wear Black Lives Matter-related gear while banning the sweatshirt with a patch honoring her father, Transit Police Detective George Caccavale.

“The staff was allowed to wear one and not the other, and now it’s hard for me to explain to my children, who are used to seeing the staff wear it on Friday, why a sweatshirt honoring their grandfather is no longer allowed,” Caccavale told “Fox & Friends” Tuesday.

“We are continuing our fight,” she added. “We would like to see a more formal apology to say that, well now both are banned. You should be happy is not enough. To make such a broad sweeping decision and make such a huge misstep when you are running the district, in charge of educating an entire district, is incredible, and as educators, they should be able to look at all four symbols on this sweatshirt in the context in which they were intended.”

“That’s the problem here,” Caccavale said. “It wasn’t until after the election that she sent an email out saying she realized her decision was not fairly balanced and now it would all be banned.”

Staffers told Caccavale that when they were called in they were told the flag was a symbol of White supremacy, which is typical left-wing ignorance and propaganda.

“However, the communication that went out from the district said that children expressed concern and, if that is the case, this would’ve been a teachable moment instead of dividing our town,” Caccavale said. “We’re a very, very small town that now is incredibly divided over this. And there was an opportunity here to bridge instead of burning down the bridge to help this.”

The Pelham Public Schools put out a statement saying the decision was part of a “long-standing policy with regards to the limits of political activities in the school environment and is working to implement it consistently,” Fox reported.

The district added: “We have never wavered in our support for law enforcement, especially our local police, and appreciate all that they do to keep us safe.”

Caccavale, however, noted that she created the sweatshirt and it was not meant to be political. She added that the community loved it and requested their own version, with proceeds going to the families of fallen NYPD officers and the Retired Police Canine Foundation.