Chief Garcia: 'All signs prove that it looks like it was an ambush' 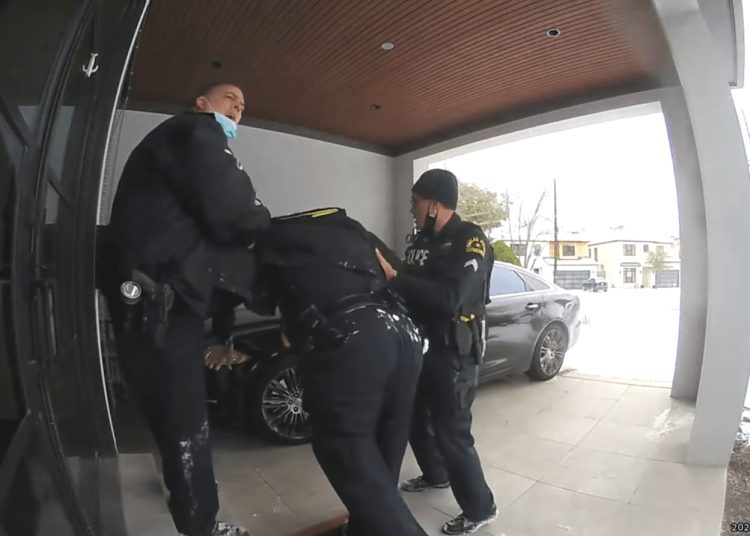 DALLAS — A Dallas man who killed himself after fatally shooting his wife and wounding two police officers at his home had twice been convicted of sexual assault, police said Friday.

Sergio Sanchez, 57, fired at police when they arrived around 11 a.m. Thursday at his home on Bonita Avenue, Police Chief Eddie García said at a news conference.

Sanchez and his wife, April Lachelle Sanchez, 31, were both found dead from apparent gunshot wounds when SWAT officers entered the Dallas home about 1:30 p.m. Thursday, The Dallas Morning News reported.

The two officers, who were shot in their lower legs, were in stable condition later at Baylor University Medical Center at Dallas. Their names had not been released.

The officers did not fire any shots, García said.

García said Sergio Sanchez had called 911 and told dispatchers he had shot and killed his wife after arguing with her.

After that call, another person, who has not been identified, called 911 after speaking to Sanchez. The caller said Sanchez planned to shoot at officers when they arrived.

“All signs prove that it looks like it was an ambush” on the officers, García said.

García said Sanchez had an “extensive violent criminal history” and didn’t want to go back to prison.

Sanchez had two prior convictions for sexual assault — including one in which the victim was a child, The Dallas Morning News reported.

In January 1984, he was sentenced to 25 years in prison for aggravated sexual assault, aggravated kidnapping and robbery. Authorities said he had attacked a 32-year-old woman the previous September.

He was released in July 1996 under a policy that required prisoners to be freed when their time served and time earned for good behavior equaled the duration of their sentence. That policy was revised in 1987 to exclude inmates convicted of violent crimes, but the change was not retroactive.

Sanchez did not register as a sex offender upon his release because he had been sentenced before that requirement went into effect.

In October 1996, just three months after he was freed, Sanchez abducted and raped a 15-year-old girl walking to middle school.

The girl told authorities that Sanchez ordered her to get into his pickup and took her to his house on Bonita Avenue — the same home where Thursday’s shooting took place. Sanchez sexually assaulted the girl, then drove her to school, authorities said.

After the girl reported the attack, police went to the home and prepared for a standoff when the occupant refused to come out. Officers eventually found Sanchez hiding in a vacant duplex next door.

As a result, he pleaded guilty to sexual assault of a child in 1998 and was sentenced to five years in prison, according to court records.

In Thursday’s incident, doorbell camera video posted on NextDoor showed one of the wounded officers trying to get to safety. The officer was standing, with the help of two partners, on the front porch of a home. His pant leg was slit to above his knee, and he stood groaning as they helped him stand.

One of the officers provided cover for the others as they left the porch with an officer in a Dallas Fire-Rescue vest.

“Heroic is probably not strong enough a word for the actions of our fire department,” García said. “To put themselves into harm’s way between the suspect and our injured, downed officers, I can’t even describe it. That doesn’t happen everywhere. I will tell you that.”

The shooting came as police were preparing for a vigil Friday evening to honor Officer Mitchell Penton, 27, who died in the line of duty early Feb. 13. A DUI suspect crashed into his squad car and knocked it into him while he was directing traffic at an accident scene on North Central Expressway near Walnut Hill Lane.

Law Officer is the only major law enforcement publication and website owned and operated by law enforcement. This unique facet makes Law Officer much more than just a publishing company but is a true advocate for the profession.
Share and speak up for justice, law & order...
Tags: April Lachelle SanchezChief Eddie GarciaDallas Police DepartmentSergio Sanchez