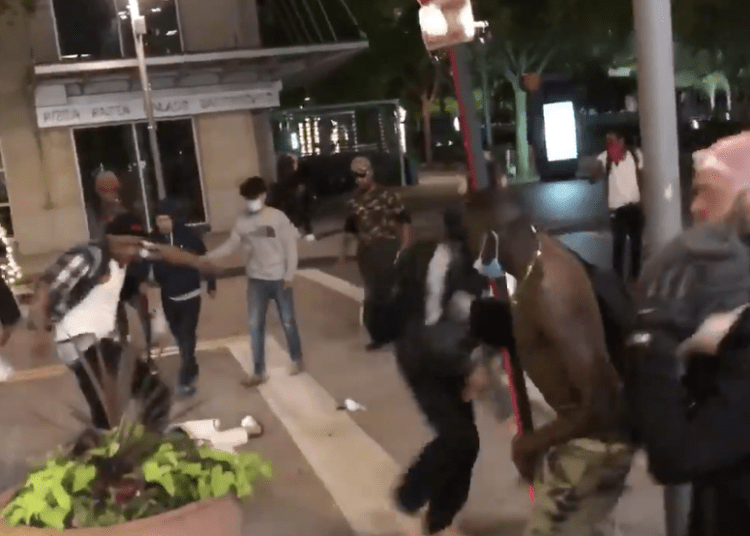 DALLAS – A Dallas man armed with a machete was surrounded by rioters and brutally beaten and stoned in a horrifying moment captured on video Saturday night, as looting and violence gripped cities across the country in the wake of the death of George Floyd in Minneapolis.

The unnamed man was hospitalized and in stable condition as of Sunday morning, local news outlets reported, citing Dallas police. No further information on his injuries was immediately released.

The man was carrying the machete to “allegedly protect his neighborhood from protesters,” police said, according to WFAA-TV. He confronted protesters while holding the machete and was then assaulted.

Graphic video of the encounter was shared on social media (see below) Saturday night as the protests turned violent as night fell.

Full unedited video for editorial requests. Please attribute to Elijah Schaffer of Blaze TV. I cannot confirm he was the store owner, but I pulled out my camera when I saw him appearing to defend a store, then he was rushed, then made the move that might have cost him his life pic.twitter.com/8oGa2obBbp

The video shows the man on the ground while a mob surrounds him. The man was kicked, punched and had rocks thrown at him. Many members of the mob scatter after the man appears to lie motionless on the ground in a pool of blood.

There were horrifying screams, and people can be heard yelling, “Turn him over!” while another says, “Don’t touch him.”

Elijah Schaffer, of Blaze TV, captured the video of the assault and shared an additional video below, which shows the moments leading up to the encounter, Fox News reported.

In the video, the man appears to be walking along a sidewalk, away from protesters, who follow him while throwing what appears to be rocks in his direction. As protesters get closer, the man rushes at them while holding the machete. The large mob then collapses on the man and attacks him.

Another angle of the sword guy

Has nothing to do with black vs white

Shop owner vs rioters is all

Schaffer and others at the scene said the man was apparently trying to defend his store. Fox News could not immediately confirm this information.

Schaffer said he counted at least 22 people who converged on the man in the attack. He says they literally “stoned him.”

Police said the man was taken to a hospital by the time officers arrived at the scene, KTXA-TV reported. Police are continuing to investigate the incident.

Hundreds of protesters looted stores and vandalized buildings throughout the night, Dallas police said. At least 74 arrests were made before midnight. They were to be charged with inciting a riot.

74 arrests have been made up to this point. They will be charged with inciting a riot.

Police also said three guns and a taser were recovered from 15 other people who were detained for vandalizing buildings after midnight.

Fifteen individuals who were vandalizing buildings have been taken into custody and three guns and one taser were recovered at Field and Woodall Rodgers near the El Fenix. @ChiefHallDPD @CityOfDallas

The riots have spread to dozens of cities across the country and prompted curfews and calls for the National Guard to be deployed.