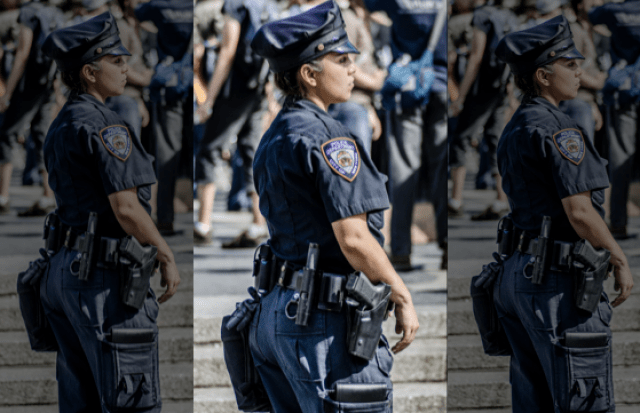 Confessions of a Law Enforcement Mom

Confessions of a Law Enforcement Mom

Law enforcement has taught me a lot about families. Amongst the entire dysfunction junction out there were countless lessons. Some of those lessons were quite eye opening and could have stood alone as a marketing campaign for birth control.

Throughout the years, I would make mental notes about the do’s and don’t’s of parenting while on duty. Boy, did I have a list of what my child was NEVER going to look like.

And then it happened in the middle of my police career: a wrench in my plan came in the form of a Millennial baby.

I watched her almost 24/7 until she was one because I was so paranoid of sudden infant death. Investigating those cases amped up my mom radars and made me a wee bit overprotective.

Once that stage was over, it was time to imprint brilliance and good citizenship upon my child. As you would probably guess, I was going to mold the perfect child because I was the police. No way would I have problems like some of “those parents” out there.

She was beautiful and perfect until she was three. When she performed her version of arm bar takedowns in preschool over dollies, I began to rethink my mothering strategies. She even inserted a few choice curse words with proper context. This was a huge problem.

It was just the beginning of school “talking to’s.”

In true generational fashion, I traumatized her when she watched Bambi for the first time. I think it is appropriate here to blame it on Disney.

Her “show and tells” often involved duck feathers and knives, stories of gutting deer, or mom cutting the heads off rattlesnakes with a shovel. Was this a Wyoming thing or does it happen all over the country?

Some calls from teachers left me wondering if home life was worse than the graphic exposures they get from movies. Nonetheless, my child had street cred.

Millennials do not come with instruction manuals. There were no warning labels that they would not follow parental orders or refuse to be a carbon copy of their wonderful parents. Add the backtalk and I pretty much turned into Edward Hyde.

Shielding your kids from graphic images, growing up too soon, or being too connected to their phones becomes a moot point after a certain age. I tried so hard to steer her childhood like mine because the 70s and 80s were so great. But, she was not a fan of dirt, mud pies, the Wonder Years, or exploring the great outdoors alone until dinnertime.

That buddy system they teach had flaws.

She did have a love for animals and a very kind heart. But that would likely get her in trouble with online predators, so I had to steer her toward wisdom to know the difference and recognize the big bad wolf.

This put them in a delayed protective bubble. Millennials take longer to grow cognitively and we thought keeping them in that incubator longer for their own sake was a good thing.

However, the world is not that easy. Another glitch in Millennial parenting is technology. Delayed cognition combined with super mature Internet and television content pushes them to be 30 at 13 because those influences take over and drive their behavior.

Ugh. What a train wreck that becomes. You cannot fight television mothers. They know more than you. Because it is on the internet, it is true. And because they saw it on TV, everyone does it that way. Just ask them.

No one really told me that Millennials would have a mind of their own, be over the top idealistic, and ask a lot of questions. It’s all very cute at first.

I had to learn to communicate through text abbreviations and emojis. “Because I said so,” created eye rolls and blatant disregard for the law: like literally. I was the law at work and the law at home. So I thought. As you can imagine, bucking the system resulted in a battle of the wills.

She liked transparency. I liked holding my cards. It was the detective in me, which, she often used against me because she said I interrogated her or tried to read her too much.

Being a cop was easy.

Try parenting a Millennial. It is like herding cats. And, I really sucked at it like a chubby kid playing on a seesaw.

As a police parent, you always question whether you do the right things with your own kids. There are times you yell too much or love too hard.

I worked extended hours and experienced call-outs as a detective. I often missed out on her informative years and special moments when I was late or never showed up.

Believe me, it is harder to write or talk out loud about those parenting failures than to just proclaim it is part of the job.

Sometimes cops sacrifice too much for the sake of public service. You can’t gain it back. It is lost time.

Besides being late or absent, I embarrassed her often because I sat alone at the top of the bleachers. I probably fit in better with the dads than the super moms. But, I could keep her safe while I had my back against the wall and my head on a swivel.

Consequently, I was not one of those fantastic school moms either. I tried it for about a year and then I could not hack it. Furthermore, I did not socialize much with other parents. They probably thought my daughter was an orphan.

I was there, but just invisible unless I was cheering her on.

Somehow she got things right despite her mother. She had an overachieving ambition and she excelled in academics. She did well in athletics. One day she came to me and said she wanted to join the service. I told her I would be very proud of her and she should research which one was best for her and the career she wanted. She enlisted in the Navy at the beginning of her senior year in high school.

As you might have guessed it, as an overbearing cop mom, I drove her away a few times after high school graduation and then once too many. It started with rules, and then ended with my way or the highway type of thing. She chose the highway. “X” marks the spot; Generation X that is.

Law Enforcement Mom had done it again; epic parenting fail. Thankfully, we repaired things before she shipped off to boot camp. I believe the police had a hard time letting her grow up.

I have always been over the moon proud of her. As a mother, I only wish the best for my child and that she is herself and becomes someone better than me. I have all the confidence in the world that she already has.

Her first letters were hard to read. [Condensed below] In fact, I cried all night after reading them.

Bootcamp so far has been hard for me. I am not as good as I thought I would be. I messed up simple things to understand and do. I am in the first week of boot camp and I feel so alone. I want to excel and be something. I am so scared in this new atmosphere that I over think things way too much. I don’t know how boot camp is going to go for me but I hope I can get through it on time and make you proud. I really miss home and want

to be home so badly. I suck it up and put on a straight face and nobody ever knows. I love you so much and miss you.

From my Law Enforcement Mom perspective, I can understand the processes of bootcamp and expect this is going to happen. However, as Normal Mom, all you want to do is make it all OK for them.

As luck would have it, she did not leave me hanging in despair or worry, but had enclosed the second week letter in with the first.

Today I went to the chapel to the Protestant worship. Is Protestant what we are? Anyways, I really loved it. It opened my eyes and lifted a weight off my shoulders. I didn’t know what to expect but as soon as I walked in, I instantly got tears and cried the whole service. I really needed to be touched by God and have him forgive my sins. It made me really wish I had gone to church with you. It was a sense of hope and faith that I needed.

Tonight she made her first call and things are better, which is to be expected. I have always been so proud of her. Seeing her really get life in a very short time is a blessing to me.

The “Trust No One” approach and “NCIC clearance” modes might save them in the beginning from the Boogie Man, but they need to trust others at some point. There might be no way to train that out of our cop brains. We Law Enforcement Moms might be rough around the edges, but we do our best.

Kathryn Loving is a former peace officer with the Casper Police Department, Casper, Wyoming. She held special assignments such as detective, hostage negotiator, mounted patrol, evidence technician, and patrol field training officer. She is a faculty member at a local college, teaching courses in criminal justice. She, DCI Special Agent Matt Waldock, and District Attorney Mike Blonigen brought to justice the first bodiless homicide conviction in the state of Wyoming in 2006 stemming from a 1990 cold case. Her proudest accomplishments were investigating crimes against children and bringing their predators to justice. Loving has a Master's Degree in Public Administration with a concentration in Criminology and Criminal Justice. Her research specialty focused on police burnout with an emphasis on recognition of, analysis, policies, and best practices.  She is currently finishing a second Master's Degree in Anthropology with a concentration in bioarchaeology. Her project and field work will include a focus on ancient human remains and archaeology in Ireland. She is currently waiting on acceptance and pending application approval for a doctorate program in Criminology with a dissertation proposal on sudden infant death investigations.