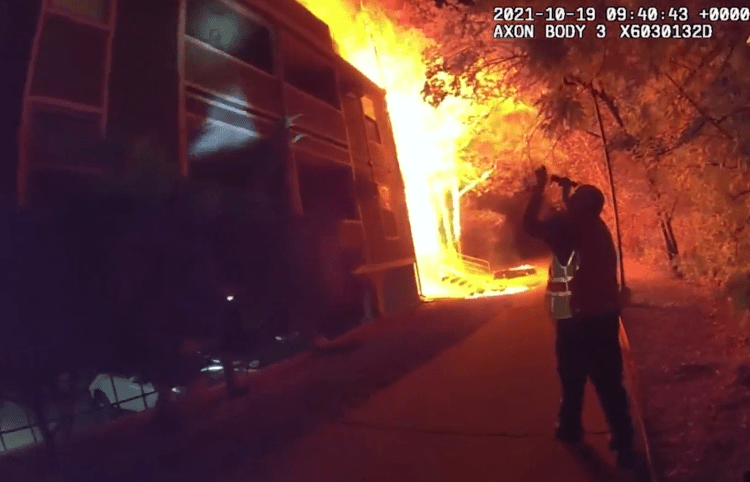 “Fire! Come outside! Evacuate now,” Boulder firefighters shouted on scene as they urged people to safety at the Whittier Place Condominiums.

In the Boulder Police Department bodycam video, you can see firefighters calmly telling a resident who is dangling above to kick out and jump, KDVR reported.

“On the count of three, kick out,” a firefighter is heard shouting. “Good job buddy, good job!”

Boulder police said many residents were able to evacuate out their front doors, yet others could not. By the time a third-floor resident heard the commotion, he was unable to escape and made the decision to leap from his balcony, as you can see in the body cam video above.

According to the Boulder Police Department, the fire burned so hot that the heat melted off the aluminum unit numbers and copper pieces, even before the flames reached it, which is at least 1200 degrees, KDVR reported.

“We are so grateful that the quick teamwork between these agencies saved so many lives that morning, both human and pet. That included firefighters rescuing a cage of birds from one residence and lowering down a frightened dog on a leash from an upper level,” according to the Boulder Fire Department.

Investigators continue their work to determine the origin of the fire.

The blaze destroyed much of the complex at 23rd Street and Pearl Street, leaving every single unit at least temporarily uninhabitable.