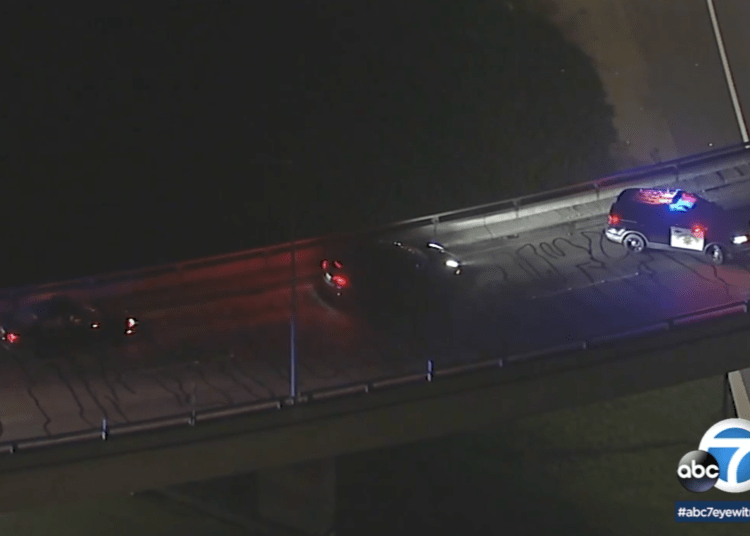 The CHP had to stop a Tesla operating on auto pilot. (Screenshot ABC 7)

GLENDALE, Calif. — The California Highway Patrol arrested a woman for DUI as her Tesla was reportedly operating on autopilot, according to reports.

A CHP incident log revealed the vehicle hit a roadside wall shortly after 11 p.m. on Thursday and kept traveling as the driver was reportedly unconscious.

“AIR7 HD was over the end of the incident around 11:20 p.m. as the Tesla vehicle was traveling at slow speeds and eventually came to a standstill after a CHP vehicle stopped directly in front of the car. CHP units had been following the Tesla prior to getting it to stop,” ABC 7 reported.

Although outward appearances looked like a pursuit, the CHP said it was not categorized as one.

Once CHP officers got the Tesla stopped on the 134 Freeway in Glendale late Thursday evening, they observed the driver was unconscious, the news outlet reported.

However, officers could not confirm whether or not the vehicle had been on autopilot when it stopped. The driver claimed that it was, Fox reported.

In radio transmissions of the arrest that were later obtained by ABC7, a CHP dispatcher is heard saying: “The reporting party is advising that his wife is unconscious in a Tesla. The vehicle is driving itself.”

More details from the dispatcher shed light on the dangerous situation.

“It ended up TC’ing (traffic collision) into the right shoulder wall, and, uh, still continuing,” the dispatcher said.

The driver told authorities she had been asleep, and CHP officers said the driver failed series of field sobriety tests, KTVN reported.

The number of incidents that involved Tesla’s autopilot feature forced the National Highway Traffic Safety Administration (NHTSA) in 2018 to investigate Tesla automobiles. In 11 crashes since 2018, 17 people have been injured and one killed.

“No commercially-available motor vehicles today are capable of driving themselves,” an NHTSA spokesperson told Fox News. “Every available vehicle requires the human driver to be in control at all times, and all State laws hold the human driver responsible for operation of their vehicles.”

“Certain advanced driving assistance features can promote safety by helping drivers avoid crashes and mitigate the severity of crashes that occur, but as with all technologies and equipment on motor vehicles, drivers must use them correctly,” the spokesperson explained.

Share and speak up for justice, law & order...
Tags: autopilotCaliforniachpglendaletesla