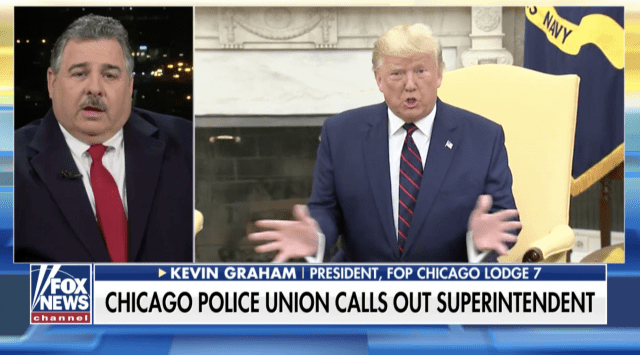 Superintendent Eddie Johnson’s decision to forego the International Association of Chiefs of Police’s annual convention — where the president is scheduled to speak next week — prompted a vote of “no confidence” from the city’s Fraternal Order of Police, the union that represents thousands of officers.

“He is the president of the United States. And, the reality of this is there are plenty of times I’ve sat listening to speeches that I didn’t care for, and I certainly didn’t walk out on them,” he said.

Moreover, Graham noted that Chicago has “derived a great deal of support” from the president, particularly with ATF agents and federal prosecutors that “prosecute our gun laws because our local prosecutor hasn’t done the job.”

“And, it’s driven down the crime. Last month we took a thousand guns off the street. Last month alone,” said Graham.

The move comes after Johnson was placed under investigation by the city’s inspector general for falling asleep at the wheel of a car last week. The incident was initially attributed to a change in his blood pressure medication, but Mayor Lori Lightfoot later told the Chicago Sun-Times that Johnson said he had had “a couple of drinks with dinner” before driving.

While it is unclear if that investigation directly influenced the board’s vote, the union has denounced Johnson’s decision to “disrespect” the president, Fox News reported.

In a Facebook post, they wrote, “Such a gesture would be an insult to both President Trump and the office of the presidency itself and would be a mark of disgrace upon the city through the entire nation, including Mayor Lori Lightfoot.”

In a statement issued on Wednesday, Johnson said that he “understand[s] and respect[s]” that the board is upset with his decision not to stand alongside the president.

“As police officers, our job is to be the voice or the voiceless and ambassadors to the communities that we serve,” he said. “I can’t in good conscience stand by while racial insults and hatred are cast from the oval office, or Chicago is held hostage because of our views on New Americans.”

Furthermore, Johnson’s spokesman Anthony Guglielmi said, “The values of the people of Chicago are more important to [Johnson] than anything that could be discussed at that speech.”

Graham told Doocy: “He has said that he has problems with President Trump. And, my feeling is, there are plenty of people that I have problems with but, the reality is when police officers are out on the street, we do not engage in political activity.

“The reality is that we are here to enforce the laws and, unfortunately, the police department doesn’t get to choose which laws they want to enforce. We try to enforce them impartially and if you want laws changed, you go to that body and try to change them,” he stated.

The visit to Chicago will be Trump’s first as president following years of criticism of the city’s violent crime epidemic.