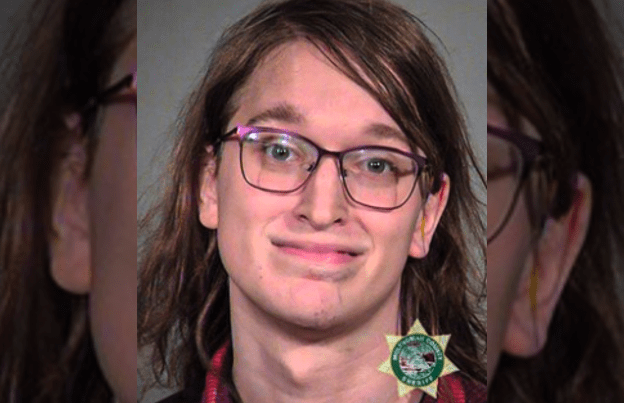 PORTLAND, Ore. — While the federal government is locking up Jan. 6 Capitol rioters for years and months on end, a serial rioter charged with assaulting officers in August 2020 at a Portland riot had a federal case dismissed “with prejudice” after completing merely 30 hours of community service.

The transgender male-to-female Antifa rioter known as Joshua “Eva” Martin Warner, 26, of Beaverton, Oregon, was charged in a criminal complaint last September with felony civil disorder after the individual who wishes to be identified as a female was found targeting the eyes of multiple law enforcement officers with a high-powered laser during an Aug. 8, 2020, riot in north Portland, the Post Millennial reported.

The Portland Police Association office on North Lombard Street was targeted during the riot as arsonists smashed windows and set fire to the police union building. Eventually, an unlawful assembly was declared during the mayhem.

The leftwing anarchists also used a trash dumpster and automobiles to block and disrupt traffic, according to court documents.

Warner was identified by law enforcement personnel as directing a powerful green laser into the eyes of numerous officers attempting to disperse the Antifa riot, according to a Department of Justice press release.

The lasers are known to cause permanent eye damage, according to medical experts as well individuals who’ve been injured by the devices.

Warner fought with police during the arrest. Once he was taken into custody, officers found a black, pen-style laser pointer in Warner’s possession.

Warner was taken into Multnomah County custody and charged with unlawful directing of light from a laser pointer, interfering with a peace officer, and second-degree disorderly conduct.

Yet unlike the Capitol rioters, Warner was quickly released without bail. Much to the chagrin of police, the charges against Warner were not pursued at the October 2020 arraignment.

However, after the federal case was investigated by the FBI, Warner was re-arrested by the US Marshals Service in southeast Portland.

Warner faced a maximum sentence of five years in federal prison for the crimes. The transgender individual appeared in federal court where a US magistrate released the defendant pending further court proceedings.

Now the federal government is dismissing all charges “with prejudice” after Warner merely completed 30 hours of community service.

“The government moves the Court for an Order under Fed. R. Crim. P. Rule 48(a) to dismiss with prejudice the indictment against Defendant, the best interest of justice,” reads the Dec. 21 motion filed in US District Court and submitted by Acting US Attorney Scott Erik Asphaug for the District of Oregon. “Defendant has successfully complied with the terms of the Defendant Resolution Agreement, including performing at least 30 hours of community service.”

According to the Post Millennial, the dismissal follows three previous arrests compiled by Warner during Portland-area Antifa riots throughout 2020. Each time the biological male who wishes to be identified as a female was released from custody without bail, and the charges were dismissed by prosecutors.

Warner’s circumstances are quite a contrast to the manner in which the Capitol rioters are being pursued with vengeance.