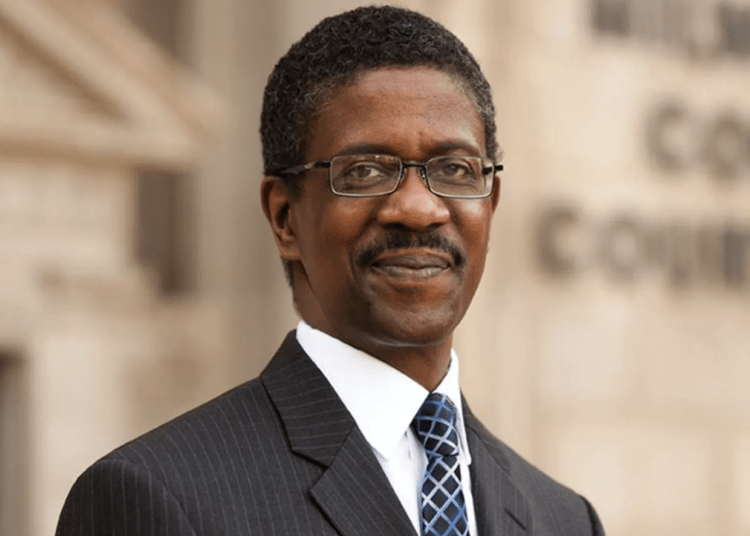 Milwaukee Court Commissioner Cedric Cornwall in a campaign photo from his failed 2014 run for a judge seat. (Cornwall for Circuit Court Judge)

Milwaukee, Wisconsin – Cedric Cornwall, the Milwaukee County court commissioner who set Darrell Brooks’ bail at a measly $1,000 in a serious felony case not long before the Waukesha parade attack, has been reassigned indefinitely to non-criminal cases, Wisconsin Right Now has exclusively learned.

We learned that Cornwall and other court commissioners are up for annual review, so we asked Chief Judge Mary Triggiano whether she has disciplined Cornwall, who set Brooks’ bail during an initial appearance for a Nov. 5, 2021, felony case in which Brooks was accused of running a woman over with a car.

“I am reviewing what happened and any kind of discipline is an administrative issue I can’t talk about,” she said. “Cornwall has been indefinitely reassigned to a non-criminal caseload right now.”

Triggiano said commissioners were last reviewed in December 2020 and she confirmed that their next reviews are being scheduled now, although some won’t be until January or February. She said that court commissioners qualify for step raises, but she doesn’t believe any, including Cornwall, are up for those now.

She said it was “the most prudent thing to do under the circumstances.” She said she is continuing to “review the situation.”

Court commissioners, when they aren’t handling criminal cases, also do work in juvenile and small claims courts. She said Cornwall, a former public defender before he became a court commissioner 16 years ago, will likely “fluctuate between them both.”

Cedric Cornwall was first hired as a court commissioner long before she was a chief judge. She said she has only conducted one of his annual reviews and described him as “pretty conscientious. He does his job well. I have never had any complaints on him.”

He was reassigned “shortly after the date in question,” she said, referring to the parade attack date.

He has been a commissioner for 16 years. Commissioners need to be “reviewed and recertified every year,” she said.

The review process involves a performance and evaluation review, review of any complaints and discipline. Cedric Cornwall is also supervised by two others, presiding court commissioner Maria Dorsey and Judge Timothy Witkowiak, she said.