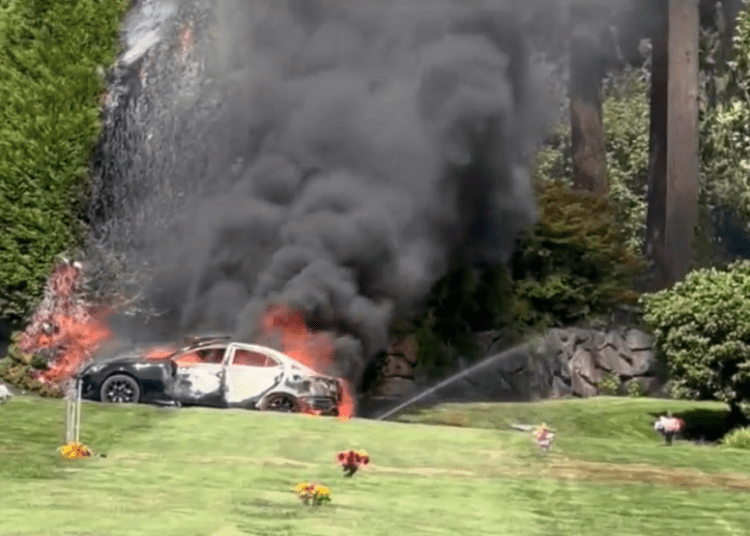 A bomb was placed in a funeral-goers vehicle in Auburn, Washington. (Screenshot FOX 13 Seattle)

AUBURN, Wash. – Police in the city of Auburn, Washington are looking for a suspect who placed an explosive device in a person’s car while the victim attended a funeral, causing the vehicle to blow up.

Law enforcement authorities said a passenger in a dark sedan placed the bomb in the funeral-goer’s vehicle at Mountain View Cemetery on August 23, FOX 13 Seattle reported.

City employees who witnessed the crime trailed the suspect vehicle, which prompted the passenger to fire “several rounds” towards them as they made their getaway, according to the Auburn Police Department.

Despite property destruction to the vehicle and surrounding grounds, no one was injured in the explosion.

Auburn police are searching for someone who put an explosive in a funeral attendee's car and blew it up – destroying the vehicle and some surrounding trees. #FOX13 https://t.co/Bg5600x6OG

“City of Auburn employees followed the suspect’s vehicle as it fled the area,” the Auburn Police Department wrote in a Facebook post. “The suspect vehicle’s passenger then shot several rounds at the employees as they followed.”

Police say the vehicle is a black Acura RL with no license plates. The suspect is described as a tall man wearing a black ski mask.

Auburn is a moderately-sized city which is located about 26 miles south of Seattle, FOX reported.

Police are asking anyone with information related to this case to call their tip line at 253-288-7403.