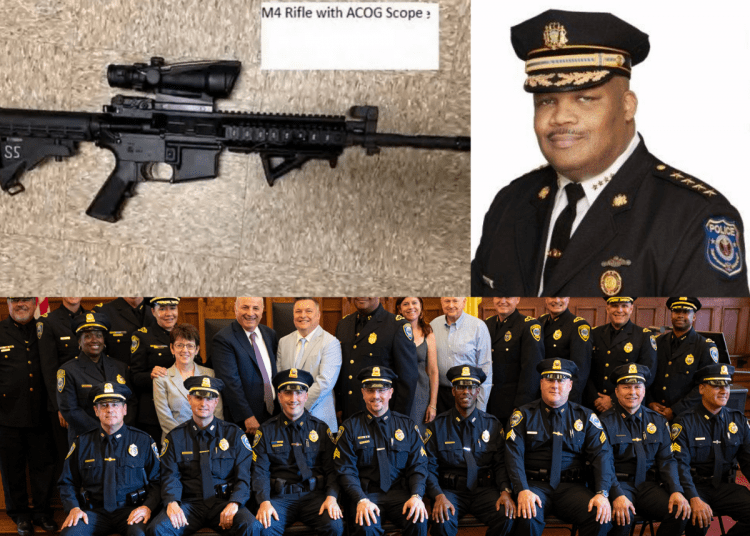 Cambridge, MA — There may be no better leader in law enforcement today than Cambridge Police Commissioner Dr. Branville Bard. While you would think being the head of a police agency in the sleepy town of Cambridge would be a walk in the park, it’s a nightmare fraught with the demands of uncountable police “reformers” and students who believe they have the right to question practically everything about the department.

Commissioner Bard is a transparent and honest leader. So when he recently released a 97-page property inventory for public view, he quickly realized what transparency gets you in 2021. The inventory (which consisted of 64 Colt M4 rifles, 11 sniper rifles and a Lenco Bearcat) quickly drew the attention of local activist Loren Crowe.

Crowe did what most activists do. And rather than reach out to the department to ask questions, he took to social media and questioned why the agency had so many weapons. In no time at all, plenty of virtue-signaling denizens of divine social media were up in arms demanding something or another. And of course, it didn’t take long before a local politician siezed the “outrage” as an opportunity to pander: Councilor Marc McGovern calling the list “disturbing.”

Initially Bard defended the equipment, as well as he should. But he recently made the decision to eliminate 20% of the department’s high-power weapons and plans to reduce the less-than-lethal inventory by 30%. Bard also decided to eliminate camouflage uniforms.

The decision came after a series of meetings with Crowe, who apparently has become an quick-study expert on law enforcement weaponry and inventory management. And while it’s a weak and feeble move to take your questions to Twitter like a 12-year-old, we give Crowe credit for meeting with Bard. It’s our experience that few of these so called activists will even meet and discuss anything they believe should be done. So, at the very least, we commend Crowe for actually demonstrating some civility and engaging in real dialogue.

Nonetheless, the workings of self-righteousness are difficult to ignore…

Unfortunately, we have no doubt that Bard’s decision will have a negative impact simply because once you give into one demand, it’s never going to be enough. And it didn’t take long for Crowe to fill the void.

During the discussions, Crowe questioned the use of a BearCat—those large vehicles that can stop bullets and pull stranded citizens out of flood waters. In a recent Op-Ed, the Cambridge Police were told to sell the BearCat. And in a practical application of critical theory that would make any woke-minded professor proud, the department was told how to use the funds—according to “demands” of course:

So far, Bard is standing tall on the latest demand as an asset re-allocation strategy. Granted such equipment is often rarely used—fortunately. But when they are needed, they are absolutely needed for public safety. Regarding the LENCO F550, Commissioner Bard explained “it’s considered a regional asset, acquired after the Marathon bombing. Police did not have adequate protection against gunfire, and none of their vehicles could withstand or protect from explosions.”

But rest assured, the demands will never stop and they are never intended to. So despite Bard’s best efforts and experience, he offers all law enforcement leaders a valuable lesson as well: think twice before giving into those who demand a lot, yet undertand so little about law enforcement and public safety.

Gunman crashes semi-truck into building, shoots and kills two bystanders, then gets fatally shot by police