The chase lasted 1 hour 35 minutes prior to the OIS 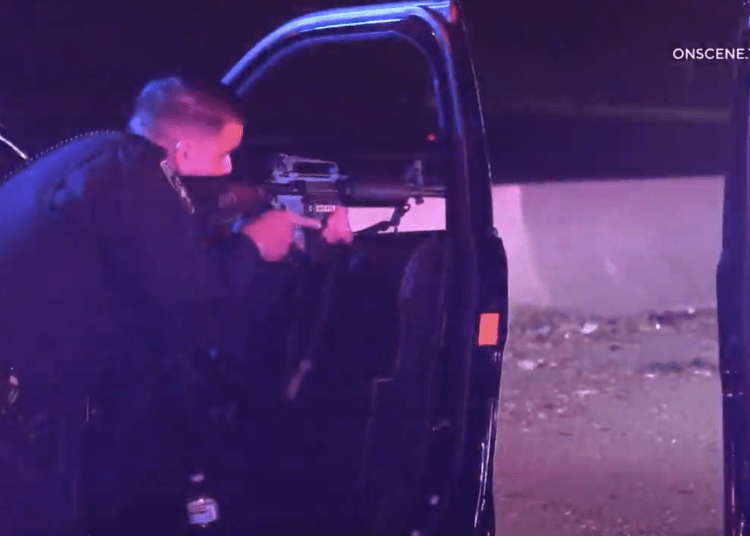 California officers engaged in a pursuit lasting about 100 miles before it ended in a fatal shooting. (OnScene.TV)

The chase began after Santa Ana Police Department officers attempted to stop a vehicle for a traffic violation near the intersection of First and Fairview streets around 11:40 p.m. Friday, Santa Ana Police Cmdr. Alvarez said.

The driver didn’t yield for officers, spurring a pursuit that led onto to the southbound 5 Freeway, where California Highway Patrol took over the chase, KTLA reported.

More law enforcement units joined the “multi-area pursuit” as the driver led officers to Chula Vista on the southbound 805 Freeway, nearly 100 miles from the point or origin.

After the chase came to a stop on the freeway around 1:15 a.m., officers from both CHP and the San Diego Police Department opened fire, striking the man, Officer Salvador Castro told KTLA.

The man was rushed to a hospital, where he was later pronounced dead, Castro said.

It’s unclear what prompted officers to fire and no information was available on whether the man was armed. Moreover, the identity of the decedent was not revealed (if it was known.)

OnScene.TV video obtained by KSWB shows officers taking cover behind their vehicles and pointing weapons toward the suspect vehicle stopped on the freeway before several gunshots are heard. Another clip shows a person lying motionless on the ground near the car as officers performed CPR.

No officers were injured during the incident, officials said.

As of 1:20 p.m. Saturday, all lanes of the southbound 805 Freeway remained closed just before Orange Avenue as CHP and San Diego police investigators converged on the scene.

The @SDSheriff Homicide Detail is on the scene of an officer-involved shooting involving @CHP_San_Diego @SanDiegoPD on the southbound 805 in Chula Vista. All lanes of the SB 805 just before Orange Ave. remain closed to traffic by the CHP for the investigation. pic.twitter.com/tzroG7rVQy

The shooting remains under investigation and no further details were available.

Chula Vista is the last city in California before the San Ysidro Port of Entry — International Border crossing into Mexico.