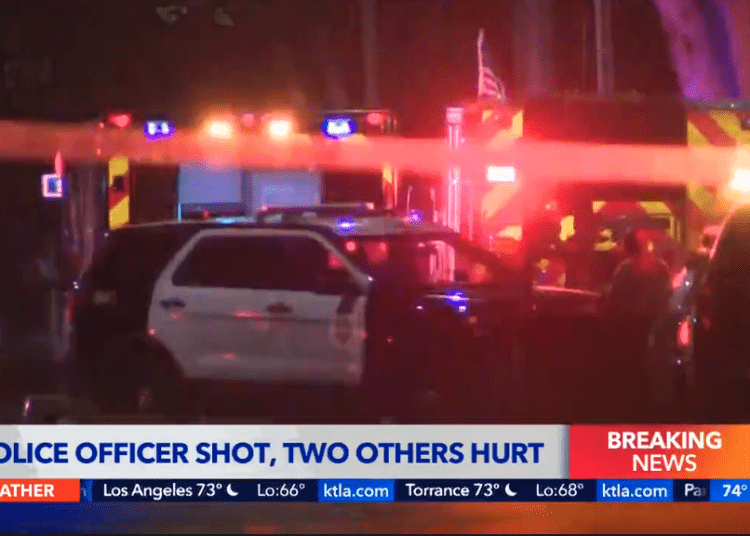 An Arcadia police officer was shot in the face Wednesday evening. (Screenshot KTLA)

ARCADIA, Calif. – A gunman opened fire and wounded three people including an officer with the Arcadia Police Department who was shot in the face. The suspect is in police custody Wednesday evening.

The gunman, who has not been identified, barricaded himself inside a residence in the 2500 block of Greenfield Avenue for nearly seven hours after officers initially responded to a domestic disturbance about 4 p.m., KTLA reported.

Arcadia police Lt. Brett Bourgeous said during a press conference that two brothers were involved in a confrontation and one was armed with a weapon.

After the officers arrived at the scene, one person from inside the residence opened fire on them, striking a police officer in the face, according to authorities, Fox News reported.

A female family member was shot and another person was also wounded, police added.

Sky5 News helicopter showed footage just prior to 11 p.m. of a suspect being taken into custody as the man limped from the front of the home with hands raised in the air.

It is unclear exactly how the standoff ended, but crisis negotiators were called to the scene in an effort to convince the suspect to surrender peacefully.

The Los Angeles County Sheriff’s Department, which assisted the Arcadia police, confirmed that the unidentified officer and two civilians had been shot.

Police said at least one of the people who was shot in the upper torso was a female family member and another injured individual was reportedly a bystander.

The unnamed wounded officer is in his 20s. He has been with Arcadia police for six months after spending several years with the Sheriff’s Department, KTLA reported.

At last report the officer was undergoing surgery and his condition is unknown at the time of publication.

Another officer was transported to the hospital with a leg injury. Further details were not immediately available.

During the standoff, police alerted the public that shots had been fired in the area, and people were asked to remain inside their homes unless otherwise ordered by police.

The shooting took place two days after an off-duty Monterey Park police officer was shot and killed during a carjacking in Downey.