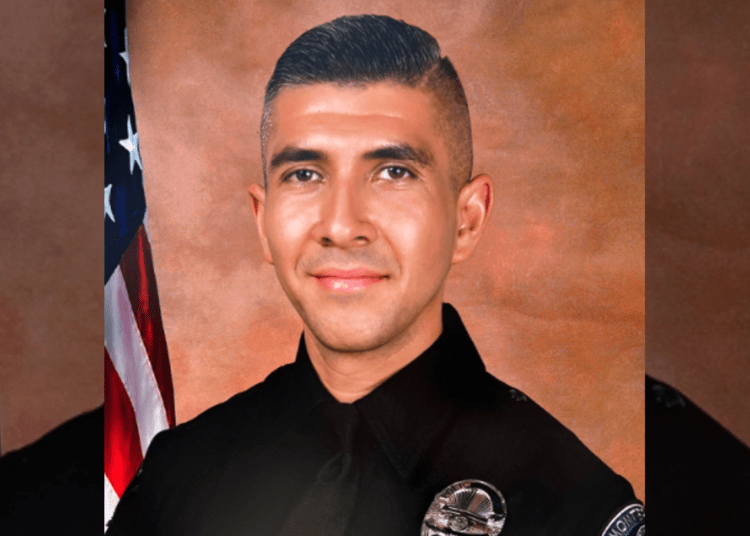 Delcid, 20, has a history of arrests on allegations of violence, according to Los Angeles law enforcement sources, Fox News reported.

Los Angeles County jail records show Delcid has been booked a half-dozen times in the past year — the most recent coming Tuesday, a day after Downey police arrested him. He is being held on $2 million bail.

DOWNEY, Calif. – The Downey Police Department made an arrest in the fatal shooting of an off-duty Monterey Park police officer in Downey earlier this week, officials said.

Lt. Dwayne Cooper announced that an arrest was made and said details would be provided later Wednesday afternoon, KTLA reported.

Officer Gardiel Solorio, 26, was off-duty when he was gunned down in the parking lot of an L.A. Fitness in Downey on Monday. The motive and what led up to the shooting remains unknown.

Solorio was hired as a police recruit earlier this year and had just started field training in late July. He was described as being hardworking, dedicated and family oriented.

Solorio is native of Bell Gardens. He is survived by his parents, brothers, sisters and fiancé.

DOWNEY, Calif. – An off-duty California police officer was shot and killed in a gym parking lot in Los Angeles County Monday afternoon, according to a report.

The shooting occurred about 3:30 p.m. in the 12000 block of Lakewood Boulevard in the city of Downey at an LA Fitness gym, KTLA reported.

Officers from the Downey Police Department arrived on scene and found a man who had been shot. He was pronounced dead at the scene, authorities said.

According to a KTLA reporter, the off-duty officer was shot while sitting in his car outside the gym.

Although the victim’s identity has not been released, police confirmed that he was an off-duty officer with the Monterey Park Police Department.

Monterey Park Police Chief Kelly Gordon confirmed the man killed was one of her officers as she spoke to reporters Monday evening.

The police agency in Monterey Park has 76 sworn officers. Gordon said the loss will be felt deeply by every individual at the organization.

“Right now our main focus is making sure that the person that did this is brought to justice and the investigation is allowed to take place the way it needs to take place,” Gordon said.

The chief added that her department will assist the family of the fallen officer during this trying time.

The homicide investigation is well underway, yet no details were immediately available for release, according to authorities.

Late Monday night, officers from several allied agencies held a procession for the fallen officer as his body was transported to the Los Angeles County Coroner’s Office in Boyle Heights.