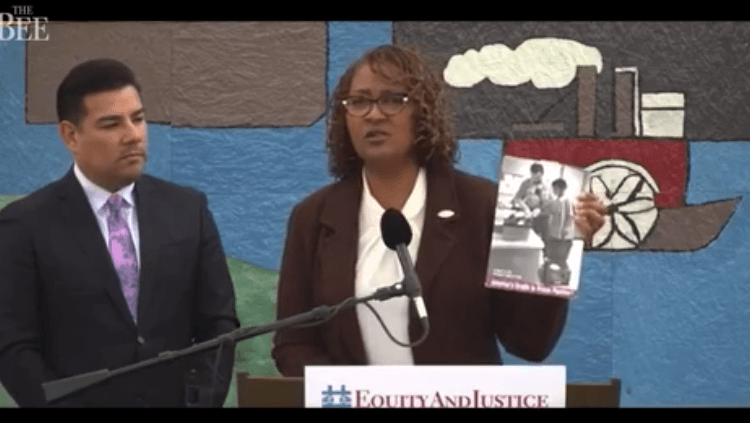 Sen. Holly Mitchell, D-Los Angeles, speaks at a press conference on March 20, 2017, to introduce a package of juvenile justice reform bills in the California Legislature. (Screenshot of video from California Senate via The Sacramento Bee)

SACRAMENTO, Calif. – A California lawmaker argues that 18- and 19-year-olds aren’t mature enough to do prison time if they break the law, and so she has submitted a bill that would treat them like juveniles.

Under the proposed bill, 20 would be the new age when someone would qualify to face criminal charges as an adult, The Sacramento Bee reported.

Skinner is placing her argument in a study that asserts the brains of teenagers are not yet fully developed.

“This research, as well as the documented higher incidents of car accidents among 18- and 19-year-olds, is what led most states to raise the legal drinking age to 21 and car rental companies to restrict their services to those 21 and older,” Skinner’s office said in a statement.

The lawmaker said she intends to work closely with groups such as the Chief Probation Officers of California and the National Center for Youth Law to craft the language of the legislation.

Larry Morse, legislative director for the California District Attorneys Association, is among the skeptics. He said the reasoning behind the bill is inconsistent.

“The obvious response is that when someone turns 18, the government declares them old enough to, among other things, marry, bind themselves in contracts, vote and, most importantly, decide to put their life on the line in service to their country,” Morse said. “You’re old enough to make all those decisions at 18 yet not old enough to be held as an adult when committing crimes?”

Nevertheless, Skinner clearly has support for her way of thinking. Her press release also included a statement from Brendon Woods, an Alameda County public defender. He points to status offenses as a reason to keep violators younger than 20 out of prison, according to The Sacramento Bee.

“Under California law, teenagers can’t buy cigarettes, beer, or even rent a car, yet they can be sent to prison for the rest of their lives. Kids should be treated like kids,” Woods said. “When a young person gets in trouble, they need our help. They don’t need to be locked in a cage.”

In a state that seems to be doing everything possible to keep violators of all ages free from custody, is this reasonable, or will it simply exacerbate an ever-growing toleration of criminal conduct? Police officers in California are overwhelmingly frustrated with lawmakers creating one reason or another to excuse criminal behavior. Several sources have told Law Officer it is this kind of proposal that has soiled the quality of life in their local jurisdictions. That is one reason why retired California cops are fleeing the Golden State in large numbers.