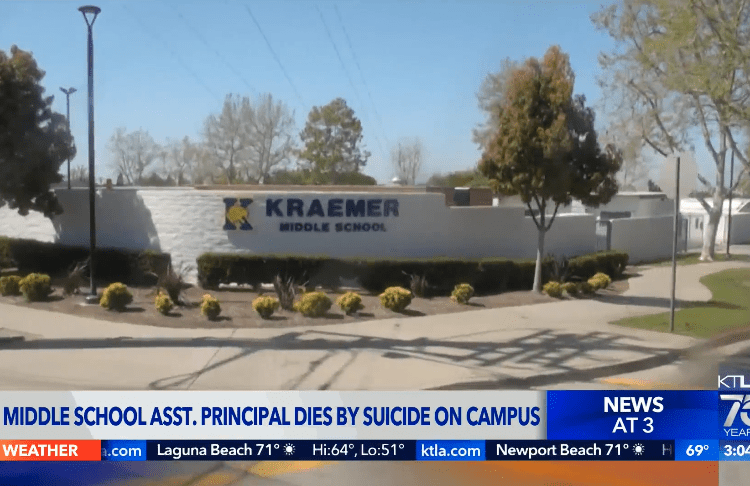 PLACENTIA, Calif. – The assistant principal at a Southern California middle school was found dead by suicide on campus, authorities confirmed.

Officers of the Placentia Police Department in Orange County responded to Kraemer Middle School about 9 a.m. on Monday regarding an employee who shot himself. The staff member was in a locked bathroom in the school administration area of the front office, according to a police press statement.

The death of the assistant principal was discovered by the school’s principal, KTLA reported.

As officers arrived on scene, the man was already dead and the firearm used in the suicide was found in the restroom. It was unclear if he left a note before taking his life.

“Moises was so much more than a respected assistant principal. He was a father, husband, brother, and friend to so many in our school district community,” PYLUSD said in the statement. “His passing, and the manner in which it occurred, has left us devastated, confused, and heartbroken; however, we ask that you please respect his family’s privacy during this incredibly difficult time.”

Other staff members and students were not present when the suicide occurred, according to the officials.

Following the somber incident, students were dismissed for the day, according to KTLA.

“While we may never make sense of or understand why this occurred, we do know that turning to each other during this time for support is essential,” Elsasser wrote. “As the Superintendent, I am struggling to find adequate words to convey the shock and heartbreak we are all feeling right now. Yet I know that we will find a way to come together as a community, care for one another, and get through this trauma together.”

The district is deploying mental health professionals to help students and staff who are impacted by the incident.