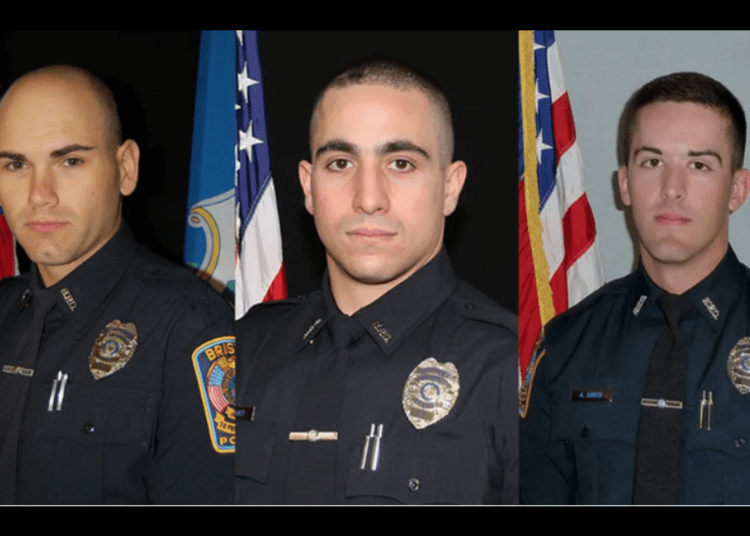 BRISTOL, Conn. –Two police officers were gunned down and killed and one is seriously injured after a suspect ambushed them at a Bristol, Connecticut, home, according to sources.

The Bristol police officers were fatally shot while responding to a call of domestic violence at a home late Wednesday night, according to Connecticut Gov. Ned Lamont, ABC News reported.

According to law enforcement sources, the gunman made a bogus 911 call regarding a disturbance at his home prior to carrying out an apparent ambush attack on the officers with an AR-15-style rifle.

Additional responding officers engaged the suspect and returned fire. The gunman was shot and pronounced dead at the scene, police said.

Moreover, the suspect’s brother also sustained gunshot wounds and has been hospitalized. His condition is not currently known, according to police.

“Our community has been rocked,” Bristol Police Chief Brian Gould said at a news conference.

DeMonte is survived by his wife and two children with a third child on the way, the chief said.

DeMonte “was assigned to our patrol division and was a school resource officer,” the chief said. “He was also an adviser for the Bristol police explorer cadet program. Throughout his career he has received several awards, including the Silver Star, officer of the month and co-recipient for Officer of the Year in 2019.”

Hamzy, a Bristol native, is survived by his wife, Gould said.

“Throughout his career, he received numerous letters of commendation and recognition. He was assigned to our central region Emergency Response Team and was also one of our cadet advisers,” Gould said.

Officer Alec Iurato, 26, was injured in the gun battle. He underwent surgery for a severe gunshot wound and is recovering, Gould said.

“This is a senseless tragedy, and my prayers are with their families, loved ones, and fellow officers. I also ask the residents of Connecticut to keep in their prayers a third officer who was shot and is currently in the hospital with serious injuries,” the governor said in a statement. “This is a devastating reminder of the dangers that police officers face every day to protect our families and neighbors from all kinds of situations. These officers are heroes.”

Gov. Lamont ordered flags in Connecticut to be lowered to half-staff, according to ABC News.

BRISTOL, Conn. – Two police officers were shot and killed while a third is seriously wounded following a gun battle late Wednesday night in Bristol, according to the Connecticut State Police.

Details have yet to be released, but all three officers are confirmed members of the Bristol Police Department.

Local media said the gunfire occurred in a residential area late Wednesday night. State Police responded about 11 p.m. to the scene after reports of an officer-involved shooting, Fox News reported.

“This is a devastating reminder of the dangers that police officers face every day to protect our families and neighbors from all kinds of situations. These officers are heroes and will always be remembered for the honorable service they provided to their town and their state,” Gov. Ned Lamont said in a statement.

“This continues to be an active situation, and I’ve directed DESPP Commissioner James Rovella and the Connecticut State Police to support the Bristol Police Department and greater community in every way they can,” he added.

UPDATE: 2 officers were fatally shot and 1 is with serious injuries. We ask your thoughts and prayers be with the families, the officer and all those impacted.

At least one witness of the incident reported hearing two long bursts of gunfire before state police responded to the area.

State police asked for prayers for the families of the fallen officers and for the officer who has been seriously wounded and hospitalized.

“We are still working diligently to gather accurate information from our investigators and all that are involved,” the state police said.

According to the New York Times, a motorcade of police vehicles, with emergency lights flashing, silently accompanied the two deceased officers from Bristol Hospital to the medical examiner’s office in Farmington about 7 a.m. on Thursday.