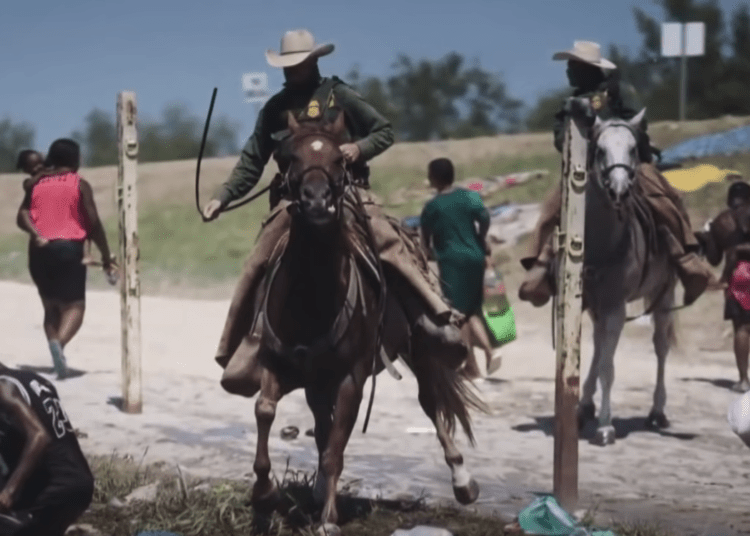 CBP agents were falsely accused of whipping Haitians migrants. The claim was quickly debunked, yet the investigation lingers on six months later. (YouTube)

Washington D.C. – White House press secretary Jen Psaki refused to address reports showing that the Border patrol agents accused of “whipping’ migrants had been cleared of criminal wrongdoing. The clearance comes after accusations from President Joe Biden and other administration officials that they were guilty of whipping or “strapping” the migrants.

The allegations occurred on September 19, 2021, outside a camp that housed 15,000 Haitian migrants, when video and photographs emerged of Border Patrol agents long reins on horseback to control illegal immigrants coming into the country.

Despite freelance journalist Paul Ratje saying that the agents were not abusing the migrants, President Biden and a host of democrat politicians said that the incident was an example of a “whipping.”

Breitbart News reported the horse-mounted border patrol agents were removed from active duty and the horse patrol was eliminated from use after the allegations.

Biden berated the border agents during a speech after the images went viral.

“It was horrible to see what you saw, to see people treated like they did,” Biden said last week. “Horses running them over, people being strapped. It’s outrageous. I promise you those people will pay.”

White House Press Secretary, Jen Psaki, accused the agents of “brutal and inappropriate” behavior after activists and public figures criticized them for following orders and enforcing the law.

When questioned this week, the White House declined to comment on the results of a Department of Homeland Security (DHS) investigation that reportedly found no wrongdoing by the border patrol agents.