Police were taking rocks and bottles from agitators during the encounter 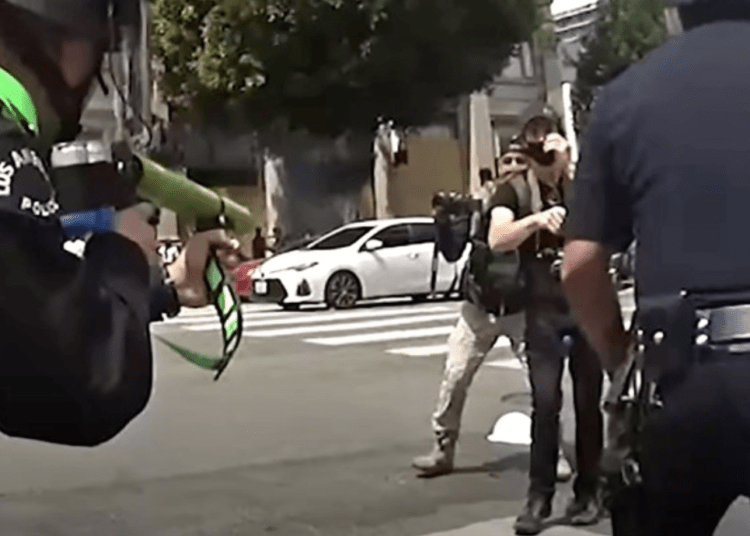 LOS ANGELES — Recently released bodycam video from protests in Los Angeles this summer shows LAPD officers take a large protest sign from the hands of a man in a Hollywood intersection, shove him backward as he puts his hands up, then shoot him in the groin with a less-lethal 40mm projectile as he takes a step toward officers.

It should be noted that police were taking rocks and bottles from agitators at the location, according to their radio traffic.

Ben Montemayor, a 28-year-old filmmaker, said he suffered serious injuries to his testicles as a result and was rushed into emergency surgery, he told the Los Angeles Times in the days that followed.

LAPD launched an investigation last month into Montemayor’s incident, citing a June 11 article in the Times about protesters’ alleged injuries by police during several days of demonstrations and unrest in late May and early June.

Montemayor said he intends to file a lawsuit against LAPD. On Saturday, he referred questions about the video to his attorney, Dan Stormer.

Stormer said Montemayor has filed a notice of claim with the city, a necessary step toward filing suit. The attorney dismissed the Internal Affairs investigation as self-serving.

According to KTLA, the video was released Friday.