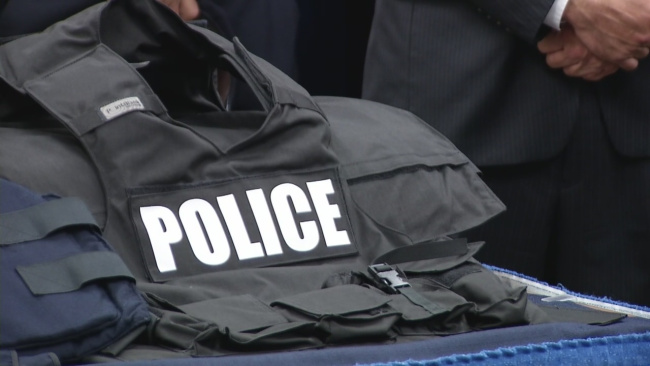 byKevin Davis
Share and speak up for justice, law & order...

Since the advent of weaponry, there has been a need for personal armor and enterprising designers who develop it using the technology of the time. From animal skins and sea shells to chain mail and metal breastplates, from the samurai of feudal Japan to today’s warriors pressing our country’s interests in the Middle East, personal body armor has been continually developed throughout the centuries. From steel plates to modern woven fiber armor, the leaps in technology have been tremendous. Armor that once weighed down the wearer and had limited ability to stop penetrating rounds is now fractions of the weight and has continually saved officers from threats it wasn’t even designed to stop.

Kevlar was first introduced as a ballistic vest material in the 1970s. The material allowed officers to wear a vest throughout their tour-of-duty with acceptable levels of discomfort. Ballistic vests disperse the energy of the incoming projectile through the weave and layering and resist penetration.

Nevertheless, designs and thickness levels at the time led to a stiff and bulky vest, so other fibers and designs such as Spectra Shield were developed. Manufacturers rushed to get thinner and lighter with the motivation that more officers would wear their vests if they were more comfortable. Over the years, vests have stopped everything from .44 Magnums fired at point-blank range to 1-oz. rifled 12-gauge deer slugs.

Warnings about the dangers of back-face deformation and death due to blunt-force trauma on the thinner vests were proven to be largely overstated (prior to airbag technology in police vehicles, untold numbers of officers were saved when their vests protected them from crushed chests on steering columns in crashes).

The rush to get thinner and lighter vests has had bumps along the road, however. Several years ago when the Toyobo-manufactured Zylon material was used for ballistic vests, it was found to degrade with wear and several incidents of vest failure were reported, including Officer Tony Zeppetella of the Oceanside (Calif.) Police Department who was killed while wearing a Zylon vest. This led to the recall of more than 130,000 vests.

Host a Vest-Shoot Demo
To learn more about the capabilities of ballistic armor, you can easily host a shooting demo. Most manufacturers have representatives who are more than willing to come to your facility to shoot a variety of ammunition on their vests. Normally, this can be coordinated through a vest distributor in your area. Vest companies would like to have as many attendees as possible and range facilities (indoor or outdoor) available. The standard is a mannequin or wooden box filled with clay backing material on which the vest panel is affixed. The representative will fire several rounds into each vest, then indicate penetration (or lack thereof) and back-face deformation by removing the panel and showing the disruption of the clay surface. These vest shoots are enlightening, and I recommend you attend one in the future.

New Designs in Armor
What amazed me as I researched this article were the new manufacturers that are in the armor business such as SAVVY’s Armor for Women and the amazing carriers and lightweight armor all the manufacturers sell. The new fiber technology and new designs make wearing concealable and tactical vests even more comfortable. The following is a glimpse of the vests available to protect today’s law enforcement.

NIJ Standards
The U.S. government through the Justice Department oversees body armor testing and classification through a voluntary compliance program run by the National Institute of Justice (NIJ). The National Law Enforcement and Corrections Technology Center (NLECTC) supervises the testing, which is done by independent laboratories for the NIJ.

The NIJ published new standards 0101.06, which require that three shots be placed within two to three inches from the edge of the vests. The NIJ hopes the edge shots extend the armor protection to a wider area. These new standards have not been placed into effect, so in 2005, an interim standard was developed to incorporate new armor technologies.

Armor representatives I spoke with are concerned that this will lead to a stiffer, heavier and more expensive vest. The NIJ has made other changes, including a “wet” test where the vest will be submerged for 30 minutes prior to being shot and an “aged” test where a vest will be artificially aged to simulate ballistic breakdown over time. It remains to be seen if the new standards will result in a heavier and stiffer vest design.

Wrap Up
It’s clear that modern armor materials and designs save lives. What’s surprising is that some street officers and detectives engaging in street activities elect to go without. As one wise police trainer once said, “It’s not the bullet with my name on it that I’m worried about, it’s all the ones that say, ‘To whom it may concern.'”

Although officer line-of-duty deaths are down 35 percent from last year, more than 80 officers have been killed in the line of duty since January 2008, which reminds all of us that the streets are still very dangerous.

The streets are no safer, and there’s every indication that they’re substantially less safe for the men and women in blue. Throughout your tour-of-duty regardless of the nature of the call exercise sound judgment, use good tactics and always wear your vests. Modern ballistic armor is more flexible and lightweight than it ever has been. Train like your life depends on it (because it does), and protect your hide (the only one you got) by wearing your vest.

Kevin R. Davis is a full-time officer with 25 years experience. Assigned to the training bureau, he’s a former team leader and lead instructor for his agency’s SWAT team. Visit his Web site at www.advancedtacticalconcepts. com. Contact him at [email protected].

Kevin Davis is a full-time officer assigned to the training bureau where he specializes in use of force, firearms and tactical training. With over 23 years in law enforcement, his previous experience includes patrol, corrections, narcotics and he is a former team leader and lead instructor for his agency's SWAT team with over 500 call-outs in tactical operations.