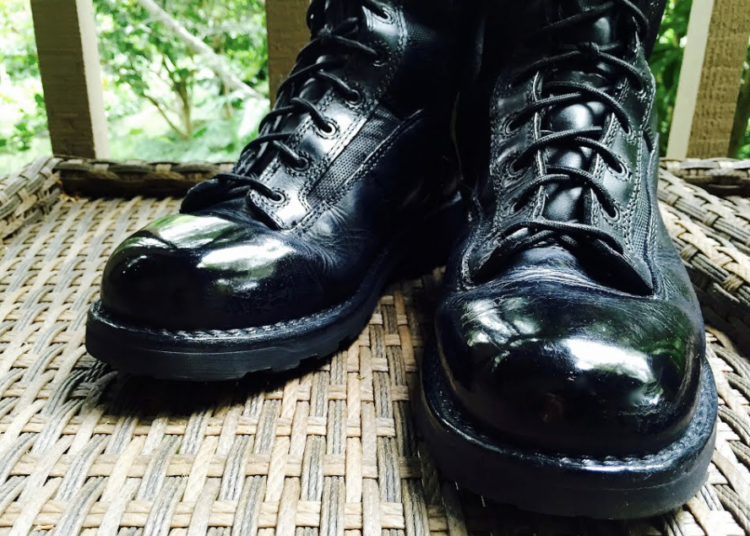 That’s what all the Street cops called him back waaay long ago.

He’d show up at the Station’s Sally Port door before the pay-day line up, and for the money, you’d get the best spit shine that could be had.

He had TWO handmade heavy wooden shoe polishing boxes, full of tubs and tins of gawd knew what, and a bevy of brushes and rags.

He’d always be jabbering in his soft Southern dialect, but never let that big smile of his off his face as he polished HUNDREDS of combat boots every other Friday.

Today, he’d be a “high-order-functioning-mainstreamed something or other,” but this was the Barrio in 1981.

Bobby was more than a mascot, he was “Family,” and every copper gave him battle ribbons, and rank brass, and other gee-dunk to wear.

One night when Bobby sliced his hand on a can of paste, one of the Marine Vets that worked at Co D got him a purple heart ribbon and pinned it to Bobby’s vest.

One day, Bobby didn’t show up. We called around to the other local cop and fire shops where Bobby worked, and we found him at the 24th Street Firehouse.

The Battalion Chief told us Bobby was “in trouble” and to rush over.

Turns out, Bobby’s dog had died overnight, and plainly put, he went on a bender of epic proportions. He wrecked a bar, broke shop windows, and destroyed a shelf display at a corner store looking for dog food for his dead puppy.

All the merchants wanted him arrested, and several signed complaints. The damage was quite exten$ive.

I saw Bobby crying his eyes out, handcuffed in the back of the Sergeant’s new Crown Victoria.

The street cops and firemen paid for the damages, LITERALLY nailed stuff to the walls, and re-glazed windows.

One Adam Henry (if you don’t know what this is, ask a cop) of a store owner however insisted that Bobby be hooked and booked, and we couldn’t plead with him enough.

Our Captain Vic, rumored to be the next Super Chief, heard of this, made a few phone calls, and then made a rare-in-person visit to the store in question.

We got him into counselling, and had a GOOD social worker assigned to his case. … And YES, we got him a new puppy!

Dave Oberhoffer started a law-enforcement career in 1979, having survived the Vietnam War, and owning an Irish Pub. His San Francisco Police Department assignments were: Walking a foot-beat, numerous sector car assignments, and Vice and Narcotics work. As an Inspector, he was then assigned to the Special Investigations Division for five years. This was followed by work as a Squad Sergeant running a team in the housing projects on Potrero Hill. As a Lieutenant, he ran the Records Division, the Crime Scene Investigation Unit (CSI), and was a Watch Commander in four different districts, retiring at the San Francisco Airport.  After retirement, Dave had a cup-of-coffee as a small-town Chief of Police, and then taught Law Enforcement Studies at several Bay Area Colleges.
Share and speak up for justice, law & order...
Tags: Bobby Shoe-Shineboot polish